Life as an OHL Rookie

Adjusting to hockey at the next level

Sometimes one year of hockey can feel like a lot more.

When the speed of the game increases to a level you’ve never seen before, it can feel like you’re playing catch-up on something you've been doing all your life.

From playing with and against players that are the same age to now in games with those as much as five years older, the change from minor hockey to being an Ontario Hockey League rookie can take some getting used to. Suddenly you go from being the tallest kid in class to needing to sit in the front row to see the chalkboard.

Opponents aren’t going to grant rookies a grace period to acclimate themselves to the new pace of play. With the standings as close as they are, every game matters in the playoff race, especially at this point in the season. Whether a player sinks or swims is up to them.

We caught up with a few OHL rookies who graduated from the Ontario Minor Hockey Association last year. When asked what the biggest surprise was entering the league, the answer was unanimous.

“I think the biggest surprise going into [my rookie year] was the speed,” said Owen Sound Attack forward Aidan Dudas. “I like to think as myself as a fast forward, move the pace, but just the speed of all the older players. Everybody playing at such a high pace is pretty overwhelming the first couple of game you’re in.” 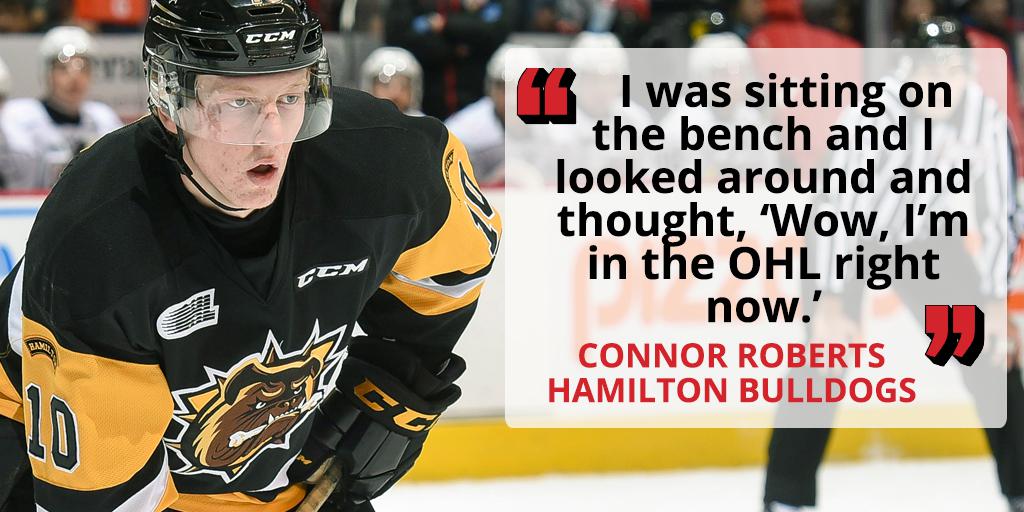 “Definitely the speed of the game. It’s a lot quicker,” echoed Connor Roberts, Grey-Bruce Highlanders grad and Hamilton Bulldogs forward. “You’ve got to be able to make plays on your feet and be able to see the ice a lot better and quicker than playing minor hockey. The guys are a lot bigger too, that was a bit of a difference, trying to be able to handle the bigger guys.”

Along with the quickness of the game, the travel adjustment comes as a major one for rookies in the OHL. Carter Robertson’s (Ottawa 67’s) longest road game as a member of the York-Simcoe Express would’ve been about three hours away. Now with Ottawa, his cross-conference matchup against the Flint Firebirds is a nine hour bus ride across the border. Combined with a schedule that often plays three games in four nights, the rest and recovery aspect of hockey becomes even more crucial.

It’s all a part of becoming comfortable not only to a new league but to a new city, new teammates and new school. Players live with billet families in their team's hometown, uprooting them from their own family and friends. While hockey is transferable from one place to another, leaving home at 16 years old and starting a new life isn’t as easy.

“The billet family has really helped me. They’ve been really good at helping me come into their house. I’ve been really comfortable with them so that’s helped me not being homesick away from my family,” said Robertson.

His brother lives in Ottawa and his family will come north to visit him but that’s more of an exception to the rule for many of his peers. Robertson has turned his unique experience into a positive one, learning a lot about himself along the way.

Dudas admits the relocation was tough for him at the beginning but things turned around once he settled into the Owen Sound community.

“The first day I moved away was pretty sad, it’s kind of hard to leave everything and start a whole new life kind of but you get used to it,” said Dudas. “My billet family is great, they really brought me in, made me feel at home. The city’s nice, it’s got a hometown feel. Going to school is good, I made friends pretty quickly. It’s been pretty good so far.” 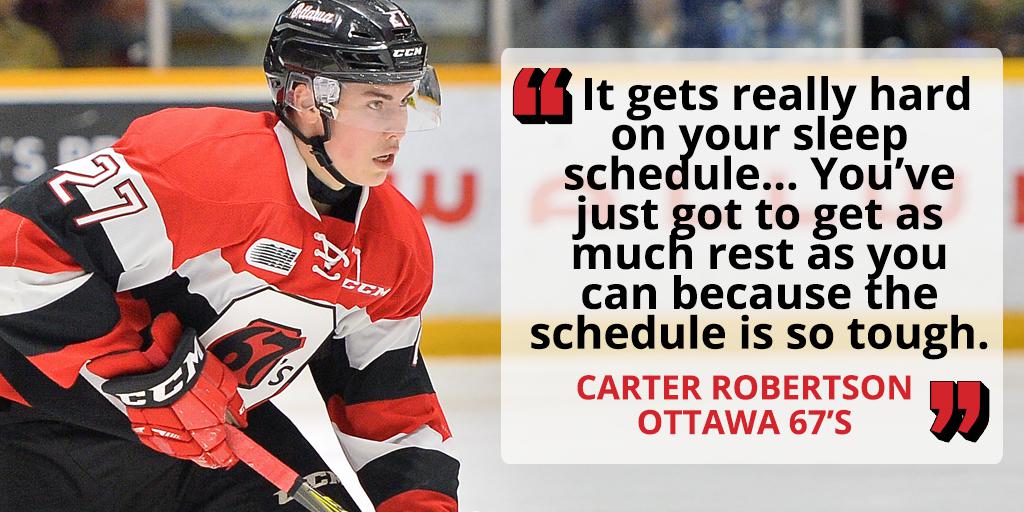 Learning the life skills off of the ice are just as important as the ones that are taught during practice. Roberts was able to pick up a lot on his almost hour-long rides to practice while carpooling with teammates with the Highlanders. He’s carried that over into his OHL career.

“I think teamwork has definitely helped me. Playing in the OMHA, growing up with all those guys, knowing what it takes to win and not playing individual hockey,” said Roberts. “Growing up with those guys, playing hockey every year with them taught me how to play as a team and don’t be selfish and then wins will come, points will also come. That’s key playing in the OHL too.”

Going from playing at the rink down the road in front of family and friends to arenas full of roaring fans is quite the change. Not every player is fortunate enough to get this opportunity and realizing that you are playing on this stage continuing your hockey dreams is not lost on many players.

As they grow older, hockey players will be the first to tell you that there are no guarantees. Spots on teams need to be earned. It’s about staying motivated and being better than the guy in front of you. That’s the advice these rookies would give to the upcoming draft class.

“It doesn’t matter where you get drafted. As long as you’re working hard throughout the summer. Have a great tryout and make a good first impression,” said Robertson.

Who knows better than the ones who’ve experienced it first hand?