Good Doesn't Let Size Hold Him Back as he Leads Waxers

Forward competing at OMHA Championships ahead of Draft 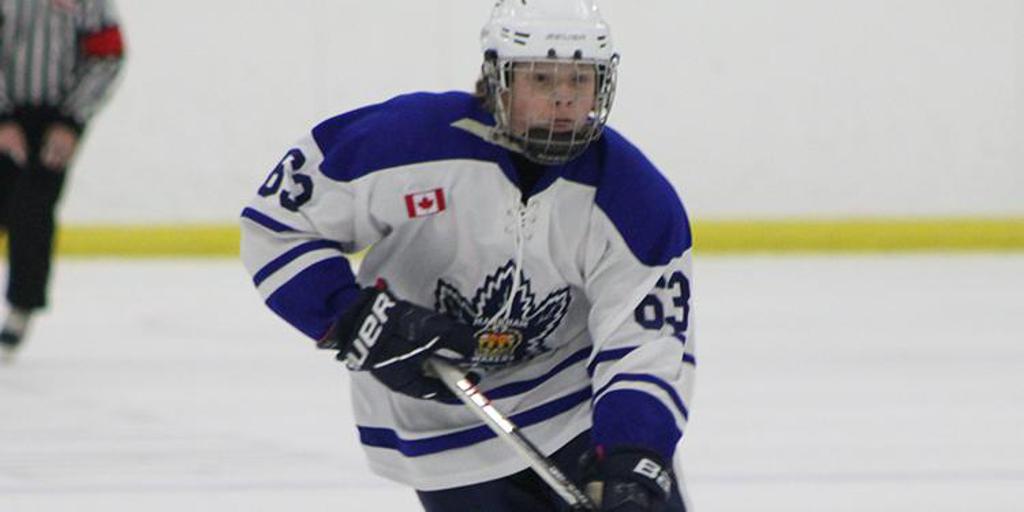 Rickson Gracie, of the famed Gracie Jiu Jitsu family once said, “if size mattered, the elephant would be the king of the jungle.” These are words Ontario Hockey League teams should keep in mind when considering Jack Good in this year's priority draft.

The 15-year-old from Pickering, Ont., stands just five-foot-seven but led the Markham Waxers U16 AAA team with 23 goals and 21 assists this season, propelling them to the OMHA championships. In the process he’s established himself as an intriguing prospect, one who coach Dan Daoust says shouldn’t be overlooked because of his size.

“He sees the game very well, he's got a big heart, he hates to lose, he's something a little bit like me,” said Daoust, who played 518 NHL games despite being just five-foot-10 and going undrafted. “He’s got the full package, we all hope as coaches when these guys get older, that they’re going to grow a little bit more. [But] there’s a lot of big kids out there that don’t got what he’s got.”

Good’s journey in hockey started when he was just four and after just a couple years his dad, Jamie, started to realize that Jack was pretty good.

“We realized pretty quickly that he was filling the net…” Jamie explained. “Whatever [Jack] did, sport or otherwise he needed to be doing it at top speed…”

After a few years of doing everything at top speed, Good found himself playing in the Brick Invitational hockey tournament. Traditionally, the tournament is meant to showcase the top talent in North America at the U10 level, but making that team wasn’t easy.

Click here to get your official OMHA Championships Merchandise

Even back then, Good says he’s “never been the biggest guy,” and the depth of the Brick Invitational field left him ninth on the depth chart. Jamie remembers a couple of emotional moments for his son as a result, but the perceived slight didn’t last long.

“I knew what I had to do,” Good said. “I worked really hard, I persevered and made my way up the lineup… I feel like it really helped me in the long run because now I know that if I'm not one of the top guys on my team … I know that I can get to that number one line. I just have to work hard.”

That attitude has gotten Good to where he is today, getting ready for the OHL draft.

Despite being the top scorer on his team, the biggest question mark scouts have raised are related to his size. SportsIllustratedProspects.com, Sports Illustrated Magazine’s website on up-and-coming players praises his skill and describes him as a “solid prospect” but adds he’s “a smaller forward in the grand scheme of things… his size may be a bit of a downside.”

When asked about the critique, Good lets it slide off his shoulder.

“There’s a baseball player named Marcus Stroman and he has a motto that says ‘Height Doesn’t Measure Heart,’” he said, believing his game IQ and awareness more than help compensate.

Despite knocking his size, SportsIllustratedProspects.com described Jack as “someone who can make very good plays utilizing his vision on the ice, and is a player that is able to make his teammates better when he is on the ice with them. This is an ability that very few players actually possess, which could make Good a prime target to be taken during the 2022 OHL draft.”

As the ETA’s second-leading scorer, those attributes are hard to dispute, leaving him on verge of taking the next step.

“I really want to play in the OHL,” said Good. “That's been my dream since I was watching the Oshawa Generals games, at eight years old with my dad.”

Good’s put in the work to get himself in that position, hoping to show the OHL that he's ready to be a lion among elephants.

Ryan Watson is a student in the Sport Journalism program at Centennial College. Follow him on Twitter @r_watson_