How an OMHA grad is giving back to the game 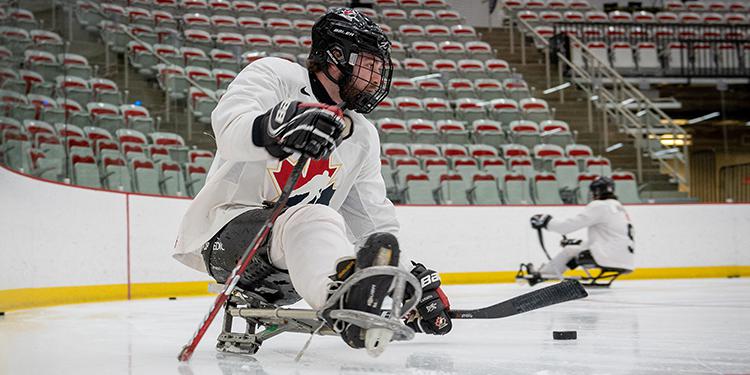 Tyler McGregor still remembers the shivers he got from playing in the Silver Stick and being part of the sold out crowds in Forest during Playdowns. Now, he’s taking that passion for the game and raising money for charity.

In February, McGregor skated his sledge for 25 kilometres on Blue Mountain’s Woodview Mountaintop Skating Loop and raised over $25,000 for the Terry Fox Foundation. He completed the first ever Terry Fox Sledge Skate of Hope in two hours.

Working for a non-profit now, one of McGregor’s goals is to introduce inclusive sports programs back home.

Today captain @tylermcgregor08 skated 25km to raise $25,000 for the @TerryFoxCanada for cancer research, a cause dear to him.

Tyler had his leg amputated as a teenager to save his life from cancer and is now one of the world’s best #ParaIceHockey players.

“I really want to go back home and try to do some sort of programming or even just show up at a nice time and go on the ice with kids,” said the 26-year-old McGregor. “I’ve done the odd thing here and there in terms of speaking to different teams locally or at banquets. Hopefully when I'm able to spend more time there throughout the year that's one thing I definitely want to do.”

McGregor was unfamiliar with sledge hockey when his leg was amputated but knew he wanted to get back into the sport somehow. He leaned on a former coach who connected him with the national team so he could get started training.

It wasn’t as easy as transition as McGregor expected.

“I thought I'd get into sled and be good right away. I was shocked at how difficult and challenging and frustrating it was because it was the exact same game, something that I knew instinctually but I was unable to execute to the level that I that I wanted to or needed to physically. It's a sport played with purely your upper body and core. It was awkward because I wasn't used to using my arms just to skate while I'm trying to shoot and pass with both my left and right hands.”

He’s been able to align his passion for hockey to show support with something important to him.

Interested in supporting McGregor? You can make a donation to McGregor's page on the Terry Fox Foundation by clicking here.

“I hope that action kind of inspires more action. It certainly has for me, I'm excited to have started something pretty cool with the Sledge Skate of Hope. It’s been inspirational and motivational and I'm trying to find more ways.”

Currently in Toronto for an unofficial training camp with some of his teammates, the Captain reflects on the lessons learned during his days in minor hockey and how it’s helped him become a leader both on and off the ice.

He’s proudest of the impact he’s been able to make on others as a role model and sharing the positivity of the game.

“I think I’ve learned a lot about discipline and resilience first and foremost, especially as I've gotten older. I’ve learned about respect in relationships. I’d say that’s one of the things that’s become most important in my life is building and enhancing that level of respect and closeness. I think hockey has taught me those things.”