The cancellation of hockey came in light of an unprecedented and difficult situation with the onset of COVID-19. For the players just beginning to compete for an OMHA Championship, it brought clear and understandable disappointment.

To make the most out of the situation the OMHA will be awarding the title of Co-Champion and presenting our coveted #RedHats to all of the teams that reached the Finals of OMHA Playdowns presented by Egg Farmers of Ontario in 2020. Each of the two finalists (110 teams) from the 55 Playdowns will receive #RedHats. Egg Farmers of Ontario will be helping fund the additional #RedHats to mark this unique and special occasion for all players and teams.

“Our goal is to be positive and proactive in a trying environment by rewarding the players and teams who deservedly made it that far through the highly competitive Playdowns,” says Ian Taylor, OMHA Executive Director. “It’s a simple gesture, but hopefully a meaningful one, as well.”

“As a proud partner of OMHA Playdowns, Egg Farmers of Ontario are pleased to recognize the Co-Champions and provide the dedicated, hardworking players with an OMHA Champions Red Hat,” says Scott Helps, Chair of Egg Farmers of Ontario. “Teams should take pride in reaching this mark and for everything they accomplished this season.”

All Co-Champions will be recognized on the OMHA website and added to our Champions database. In the coming weeks we will be sending out #RedHats in recognition of everyone’s achievement. For this season, a portion of each sale of Champions clothing will be donated to Student Nutrition Ontario, which assists in feeding students across the province by teaching healthy habits and offering nutritious foods. 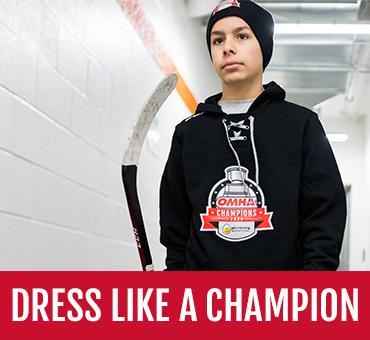