Pair of Officials turned Friends Making Their Mark on the Ice 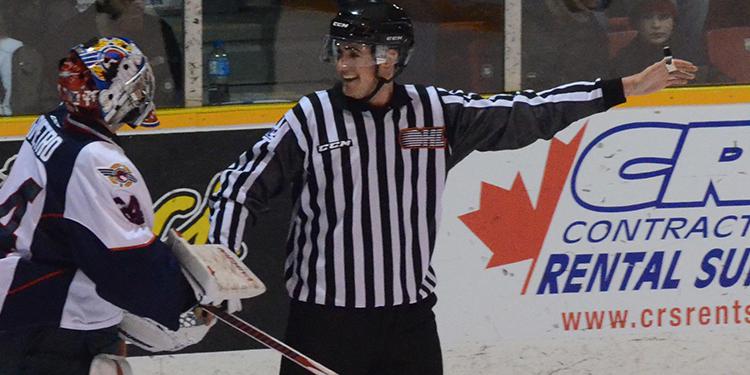 Kevin McArthur in action in an OHL game.

When the puck drops at the Telus Cup it will be another box checked off on the lists of Kevin McArthur and Ryan Harrison.

The duo met last year at the Central Midget championship and formed a good bond over the week. Paired up as roommates during the event, the tournament ended up being the start of a friendship off the ice. It turns out that the two have a lot more in common than a typical officiating crew, including a passion for officiating that goes deeper than the whistles.

McArthur originally decided to become an on-ice official after hearing that both of his grandfathers were referees. He wanted to see what it was all about.

"My dad had kept me heavily involved in hockey as an official as well just to pass that down from my grandfather," said McArthur. "My dad kept me involved in the game as an official based on them doing it as a passion and enjoying it and being a part of the game and giving back to the minor hockey kids so it definitely had an influence, for sure."

"I'm pretty excited about the opportunity to do this. I know only a few guys get selected to do this in their lifetime so I definitely don't take that for granted and appreciate the selection."

Harrison's story is similar. His father was a referee and climbed all the way up the ranks to the American Hockey League. That helped Harrison develop his passion for officiating.

"It started when I was pretty young going to games with him. Seeing him work on the ice got me pretty passionate about getting into reffing," said Harrison. "It was definitely something I wanted to do once I stopped playing. I actually did start reffing when I was playing but he definitely helped me out the most along the way and has been a big influence in getting me to the levels I'm going to."

Harrison and McArthur have officiated in OMHA, OHA and OHL games, some of them together. However, they had yet to have the opportunity to officiate in the Telus Cup until now.

When opportunities to officiate events like this arise, Dave Wedlake, Chair of the OMHA Referee Program reaches out to area supervisors and instructors to see if they want to put any names forward that could work this level of hockey. 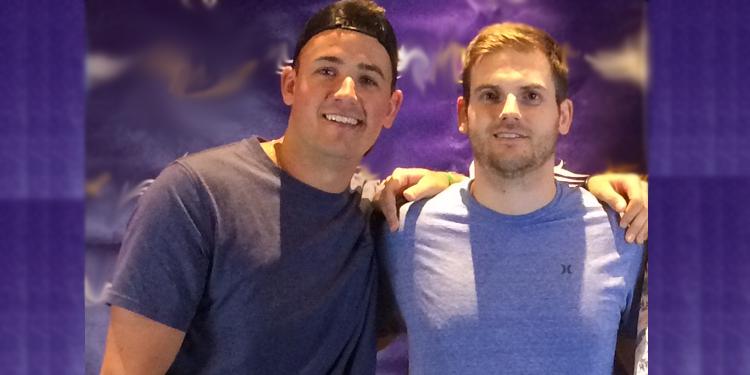 McArthur and Harrison became friends off the ice after officiating a game together.

"When the Regional Midget AAA Championships were unfolding last year, (McArthur and Harrison's) names were put forth. I went out and supervised them both and I recognized that they were probably two top candidates to represent the OMHA at this prestigious championship," said Wedlake.

Wedlake, who himself worked the Telus Cup in the past, knew exactly what qualities he was looking for.

"They're fundamentally sound. They're both extremely strong skaters. They have a real sense and feel for the game. They just generally have the right attitude that you're looking for when you send officials to these types of championships. That kind of all mixed together makes them good officials.

"It's all about getting exposure, getting that recognition and getting established who they are."

The Telus Cup is Canada's national Midget Championship. The final six teams will be competing in a week-long tournament in Sudbury starting next week. The Ajax-Pickering Raiders nearly punched their ticket but lost in the gold medal game of the Central Regional final.

Want to become a Referee?

Officials perform a vital role in the game at all levels are the third team on the ice, without whom the game would not happen. Check out the OMHA Referee page, find a clinic in your area and get started today!

The OMHA has been sending officials to the event for years. For someone like McArthur, who is trying to move up the ranks as a referee and is always progressing to become better, this event is one of the next steps. He knows there will be a lot of eyes on it from supervisors.

"It means a lot. I'm pretty proud of this accomplishment for myself," said McArthur "I'm pretty excited about the opportunity to do this. I know only a few guys get selected to do this in their lifetime so I definitely don't take that for granted and appreciate the selection."

Harrison and McArthur are both looking forward to working together again and adding another level of hockey to each of their résumés.

"It definitely has a little extra to it. I’ve made tons of friends in places I’ve refereed but some guys are closer than others and it's always a little extra exciting to work with those guys,” said Harrison.

"That's another aspect of officiating, you never know who you're going to meet. I now have a lifetime friend in Ryan,” added McArthur. "We've done OHL games together this year as well as travel on a few trips outside of hockey so you become friends with guys you officiate with off the ice as well which is a good attribute for becoming an official."

Mitchell Machtinger is the Coordinator of Communications at the OMHA. He's worked with various sport organizations and is an avid fan of all sports.