Podcast | Making the Most of Practice Time

Tools that coaches can use to maximize time on the ice

Many hockey teams across the country sometimes struggle with a shortage of ice time. This can affect practice and how much time a team has to run drills on the ice. Some organizations have come up with the idea to run half-ice practices where two teams share the ice at the same time. Others run station practices, where players on the ice rotate between different drills.

It is important for coaches to make the most of their ice time. Teams can get creative and host practices on tennis courts, parking lots or in gyms and run some drills and concepts away from ice time. Additionally, coaches can use time before practices to go over drills before actually stepping foot onto the ice.

Stan Butler is the head coach of the North Bay Battalion and is the longest serving coach with one team in the Ontario Hockey League. His international experience spans more than a decade with the Canadian U-18 National Team, winning a gold medal at the 1999 four Nations Tournament and the 2015 Ivan Hilinkia Memorial Tournament. He joined the Breakaway Podcast to discuss how coaches can use ice time the most effectively.

“I think the biggest thing is explaining and talking and I think a lot of that you have to try to do, obviously you have to correct on the ice, but if you can do some of that stuff in the dressing room and things like that, use your ice right to the minute, that certainly maximizes the time you have on the ice,” said Butler, whose Battalion team opens up their OHL season this week.

Sharing the ice during practice is a tool that can be done with younger players, according to Butler. When players get older this may become a problem as they are bigger, faster and take up more space.

“Sometimes you need to do certain drills full ice, I think that’s important to do. There’s other times you can do split groups which just use each end. The other times you can use all three zones and teach different things. I think a combination of all those type of things makes for better development for players.”

Butler suggests coaches keep drills and practices as simple as possible and use visuals whenever they are explaining something. Naming drills and running them a few times helps kids remember it better, so once they hear the name of it they will know where to position themselves on the ice. 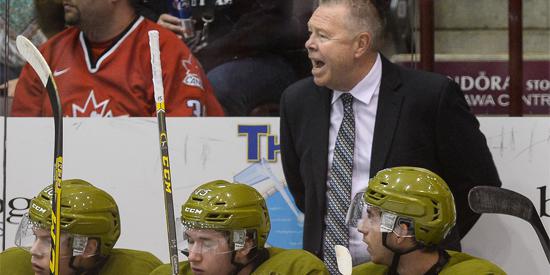 “Kids are visual learners today, they’re not auditory learners. I think it’s important that you show them what you’re going to do and that’s the way they seem to teach them today. I don’t think there’s anything wrong with having people film your practices and sometimes that’s good and you can re-show them to the players. Anything that you can do with video and show kids them doing something I think is the way to go with teaching tools.”

It is important for coaches to have a gameplan going into practice. Know which areas of the game to focus on during the session and which drills can help improve skill in those situations. Going over power plays, penalty kills, odd-man rushes, etc. helps players prepare for when they encounter them in a real game while still having fun doing so.

“I think (fun has) got to be in every drill and every situation. I think you can compete extremely hard and do everything you need to do and still push yourself and have the fun component in it.”