We sat down with Dermott to talk Minor Hockey Memories

One of the most decorated OMHA champions in history, defenceman Travis Dermott captured #RedHats five times as a member of the York-Simcoe Express. He was selected in the second round of the 2015 NHL Draft by the Toronto Maple Leafs and made his AHL debut with the Toronto Marlies during their playoff run. Dermott was the Guest of Honour at the Parade of Champions, congratulating each team as they crossed the stage, and we sat down with him to talk Hometown Hockey ahead of the 2016 NHL Draft. 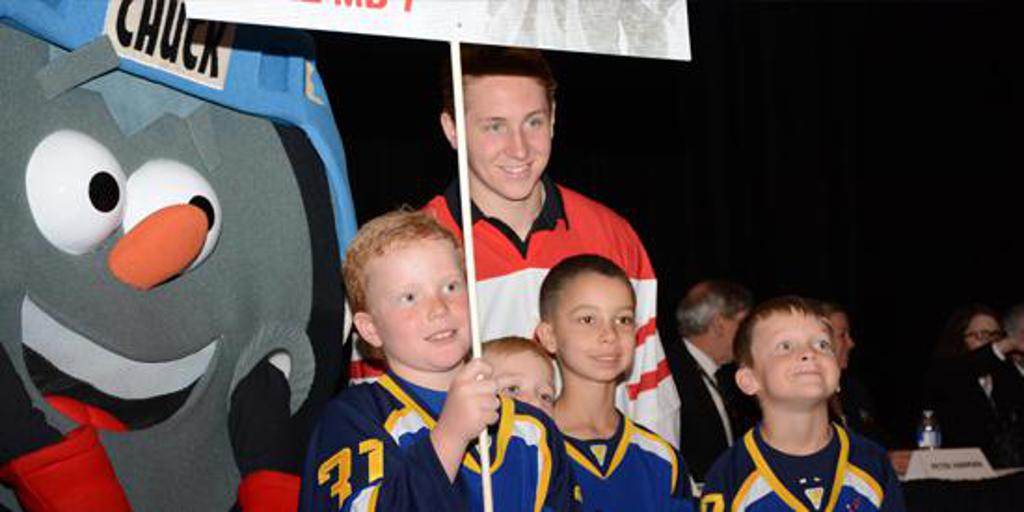 Dermott was the Guest of Honour at the Parade of Champions

What does it mean to you to come back to an event like this and be able to give back to the next generation of minor hockey players?

It’s great. You always try to go back to where you grew up and where you developed as a young player or as a kid. The OMHA taught me a lot about minor skills and just learning the game and having fun. Giving back here, it feels great and it’s good to see all these kids.

What were some of the skills that you learned with the OMHA that you have been able to apply to your career?

I feel like everything. From learning to skate right down at Novice to Minor Midget when I was getting drafted. It was a whirlwind a definitely the biggest development years of my life. Coaches and teammates throughout those years helped me a lot to be where I am today and I wouldn’t change those years for anything. 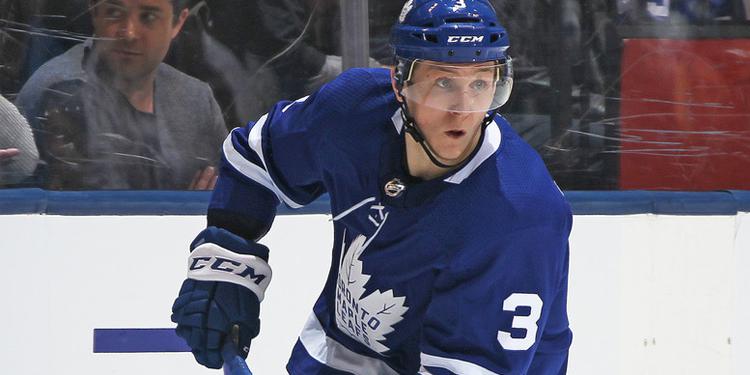 Dermott made his debut NHL debut on January 6, 2018

What do you think hockey teaches our youth?

Everything. Teamwork, respect, learning how to take orders from a coach and applying it to sports or work or whatever these kids end up doing in their future. I think hockey sets up a great background for them.

If you could give minor hockey players one message, what would it be?

Just keep working and keep doing everything you can to get that edge on, whether it’s a guy beside you or a guy that you want to beat in the future to get a spot on a team that’s further in your career. You just need to do everything you can and believe in yourself. You see all the players that are out there and it kind of seems impossible, like ‘How am I better than all these players? How am I going to beat all these guys to make this team?’ You keep working hard and guys out there aren’t going to be willing to do it so if you’re willing to go out there and work your hardest every day then you’ll get a chance to be what you want to become. 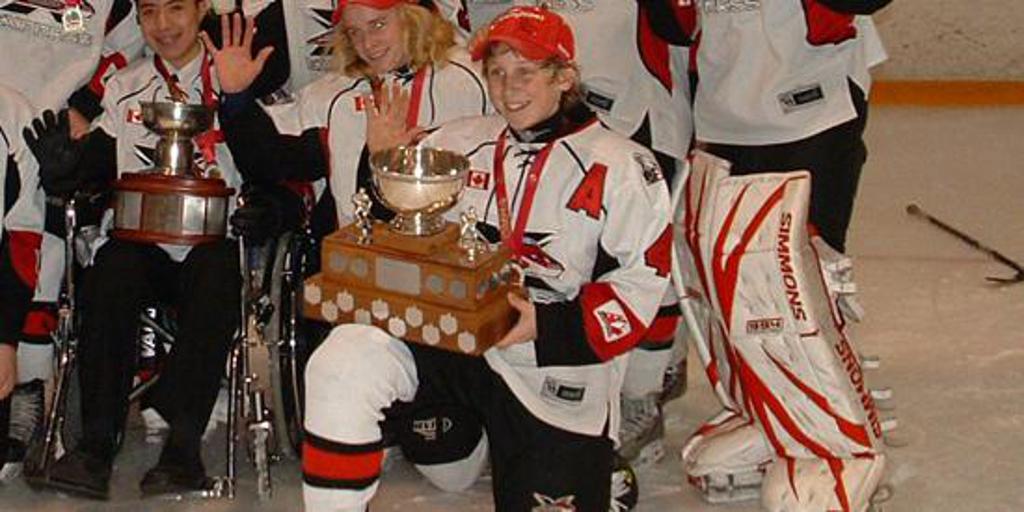 You won multiple RedHats with the Express. Is there any minor hockey memory that stands out to you?

Probably my Peewee year. We won the OMHAs, we won the OHFs, and then we went to the Peewee International tournament in Quebec which was the big be-all, end-all of tournaments that year. I think we started off with a loss, which put us in the lower bracket, which meant we played against the harder teams and not the nice arena and we ended up battling back to get to the finals. I think we were up 2-1 or 3-1 going into the third period against St. Louis, which was exciting, ‘Oh we might actually win this.’ Sure enough, they came back and beat us but I think that year was probably my most successful year and probably my most memorable as well. 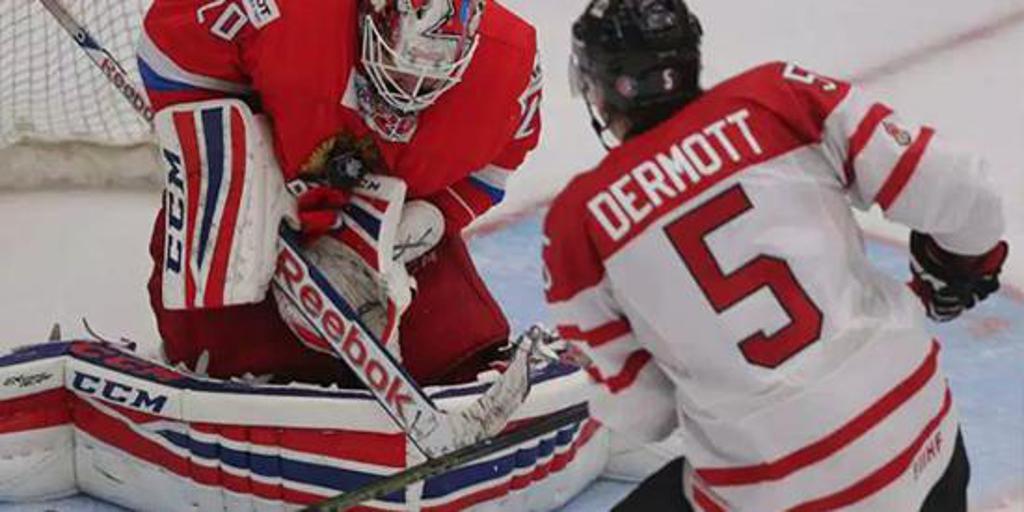 This year has been a whirlwind for you, starting with Team Canada and the World Juniors then getting called up to the Marlies for the end of their Calder Cup run. Can you describe your year?

It was a good start to the year with Erie and we were playing pretty well. We were up in the top of the CHL rankings and it was pretty exciting. Then I got the chance to play with Team Canada and it was a great opportunity to go away to Finland. It was kind of a letdown how we ended it but it was still a great experience with the team and the organization and I learned a lot of stuff. I came back to my Erie team, we were playing well still. We kind of ended our season off a little disappointing as well but it was overall a good season, I feel like I learned a lot with them. Then I got the opportunity at the end of the year to jump up with the Marlies and oversee and practice with them. It was cool, getting into the groove of stuff with them and just learning how they live day in and day out, it was something I needed to get used to and I feel like I did.

Would you say this has been the biggest year for you in hockey?

Probably turnaround, yeah, I think for sure it was. It was probably the biggest step for me with Team Canada and jumping up with the Marlies. You had to take it all in and I learn as much as you can and I feel like I did that. 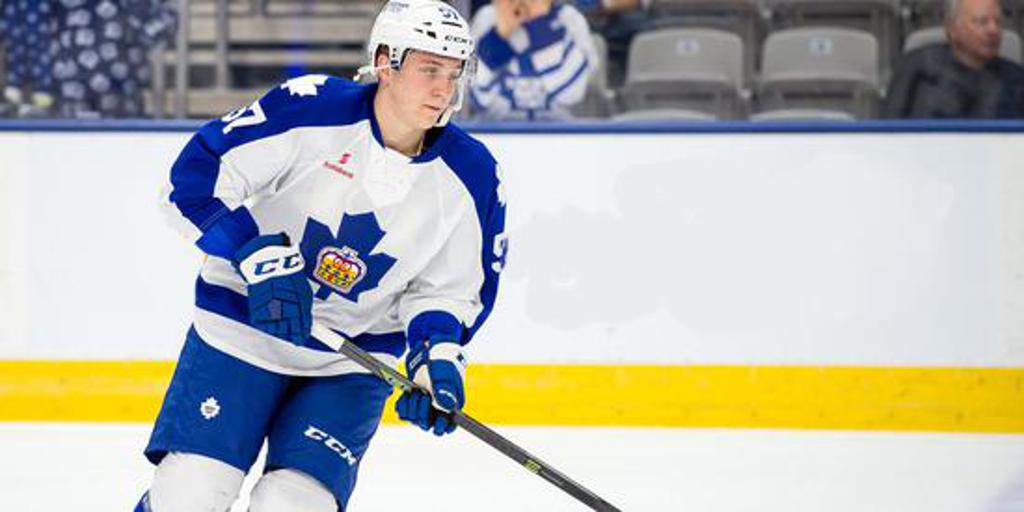 Dermott with the Marlies on their Calder Cup run

Every kid dreams of getting drafted into the NHL but you had the honour of being chosen by your hometown team. Can you describe that experience and what that feeling was for you?

It was crazy. I remember hearing that they were up next for the pick. I didn’t talk to them too much during the year so I wasn’t expecting them to pick me but sure enough, I saw them looking up to me in the stands and I turned to my dad and said "Hey, how would you feel if I was a Leaf?" It was a pretty cool feeling when they announced my name knowing that that was the team I grew up watching and admiring. It’s pretty cool to have them trust me enough to pick me and also to be a part of the team. 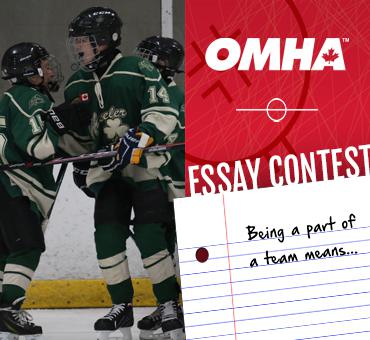