The Foundations of Strong Rebound Control

Rebound control is a facet of the position that is referenced with regularity when evaluating goaltenders of all levels. Like any acquired skill, there are a number of elements that form the basis of a solid puck control foundation.  Let’s look at the three essential elements of rebound control that should be considered. 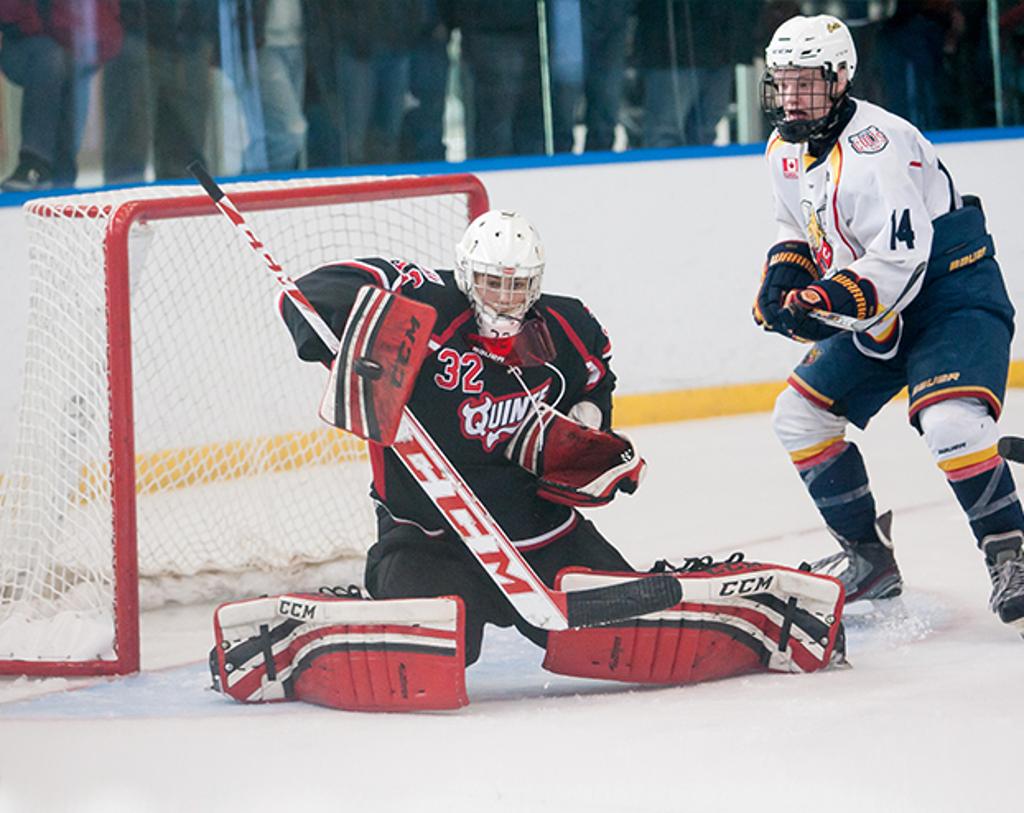 The Pre-Save Foundation
Before any save can be made effectively, the goaltender must first locate the puck and then, if time permits, survey the entire ice to evaluate possible scoring threats before re-narrowing their gaze back onto the puck. It is especially important for young goaltenders to not distribute their gaze too much and become distracted by the multitude of other variables that are unfolding around them. Learning to focus on the most imminent threats is a vital skill that will develop in complexity with time and experience.

As the goaltender locks onto the puck visually, they also need to establish a strong “puck centered position”. The goalie needs to position themself in such a way that if an imaginary line were to be drawn from the center of the net to the puck, then that line would travel through the center line of the goaltender. This ensures that the goalie is on their angle.

The goaltender would then adjust their depth depending on the amount of time, location of opposition players and their personal style of play before finally getting square to the shooter (if the puck carrier is not on a deep angle). If a goaltender is not square or on their angle they are forced to make more “reaction type” saves  which often results in them utilizing their limbs rather than their bodies.  This makes it more difficult for goaltenders to contain or place pucks that contact their limbs rather than their chest or abdomen.

The Save Phase
Once the goaltender’s position becomes established, they then need to ready themselves for the shot by reading the shooter’s release. This allows the goaltender to anticipate the intended height and location of the shot. By reading the release effectively, the goaltender can react directly to the shot rather than executing multiple moves. This lessens the likelihood of the goalie reacting “late” to a shot and enables them to handle pucks in a more controlled fashion.

After the shot is fired, it is vital that the goalie track the puck the entire way into their body. It is not uncommon to see a lot of young goalies track pucks partially into their bodies before releasing their focus and relying on their peripheral vison for the remainder of the shots flight. This dramatically lessens a goalies’ visual acuity and therefore heightens the likelihood of that goaltender not fielding the puck cleanly.

A detail that is often neglected is the skill of shifting into shots. Many goaltenders play a very rigid style with little movement in their torso or upper body. By shifting or leaning into saves, goalies maximize their net coverage area while lessening their reliance on making saves with their limbs.

Utilizing the stick, pads or even body to place pucks into safe areas is a skill that all goalies need to practice constantly. When specifically trying to contain pucks that contact the body, it is essential that goalies maintain an active catching hand.  What is meant by this is that the goalie needs to “sweep” their catcher in an upward motion to hold the puck after it has contacted their body. It is important to understand that the goaltender is not attempting to trap the puck against their body but rather sweep up from underneath and gathering the puck after it has contacted their body.

Post Save
If the goaltender does not contain the puck, then they must try to regain their puck centered position on either their feet or their knees depending on the situation.  This allows the goalie to become as big as possible in the goal to perhaps control the second shot. The net minder must determine if they have time to gain their feet or remain down and utilize their edges to push into position. The level of mobility of the goaltender both on their feet and/or in a down position is the major determining factor in making this decision. If it is not feasible to establish this puck centered position, then full on scramble mode is in effect, making the save in the most opportune manner.

Strong skating skills are hugely advantageous since it allows the goaltender to get into position earlier and in a more controlled manner both before and after the shot.

In short, more time allows for better positioning, which allows for fewer reaction type saves. This in turn means more shots off the body, which are easier to gather. Strong rebound control not only enables goaltenders to play a simple and precise game, but also allows their teams to execute a more controlled game plan within their defensive zone.  By containing pucks efficiently, the goaltender is able to dictate the pace and the flow of the game for their team.Rebound control is a valuable asset that must be cultivated constantly, regardless of the age or level of the goaltender. So make those pucks stick every chance you get.