PODCAST | How to Build The Ultimate Outdoor Rink

Anyone who follows me on twitter (@DarrenDreger) or pays attention to a featured segment on TSN.ca, knows I have a passion for backyard rinks.

To be honest, there isn't one thing about the process I don't enjoy.

I've honed the construction phase of the project to a point where assembling the boards and preparing the rink for water takes only a few hours.  However, getting to this stage has involved many years of trial and error, countless trips to the local lumber yard and a couple of backyard renovations in what has been a constant search for leveling perfection.

Okay, it might be more of a sickness then a passion.

As much as it's about enjoyment for my kids, truth is, I find the build and management of my rink somewhat therapeutic. There are few things more satisfying in the hockey-crazed world I live in then admiring the glass-like finish after a hot flood.

As a boy, growing up in Saskatchewan, there was never a shortage of ice.  If the arena wasn't open, we would shovel off a pond, or head down to the lake, often near mummified by multiple layers of clothing to brave the elements.

I recall racing across a pasture to be first on...my skates swinging over myshoulder, when my boot toe-picked and down I went, mere feet from the pond's edge.

Unfortunately, this "yard sale" wipeout resulted in a terrifying and nasty gash on my right wrist compliments of a skate blade.  I was less concerned with the considerable loss of blood and more annoyed at not being able to join the game because of my carelessness.

I was 10, but the seed was planted, in the freedom I felt playing outside.  Aside from the call for supper, there was no time limit and perhaps, most importantly, there was no structure, or direction on how I needed to play the game.

Years later, I watch my kids (Cady-14, Mason-12) come home after practice or a game and head straight out to the backyard.  On this pad, there are no whistles, very little coaching and no one to judge whether the "celly" after a bar-down goal is appropriate or not.

I see the love of the game from my patio doors.  It doesn't get better than that. 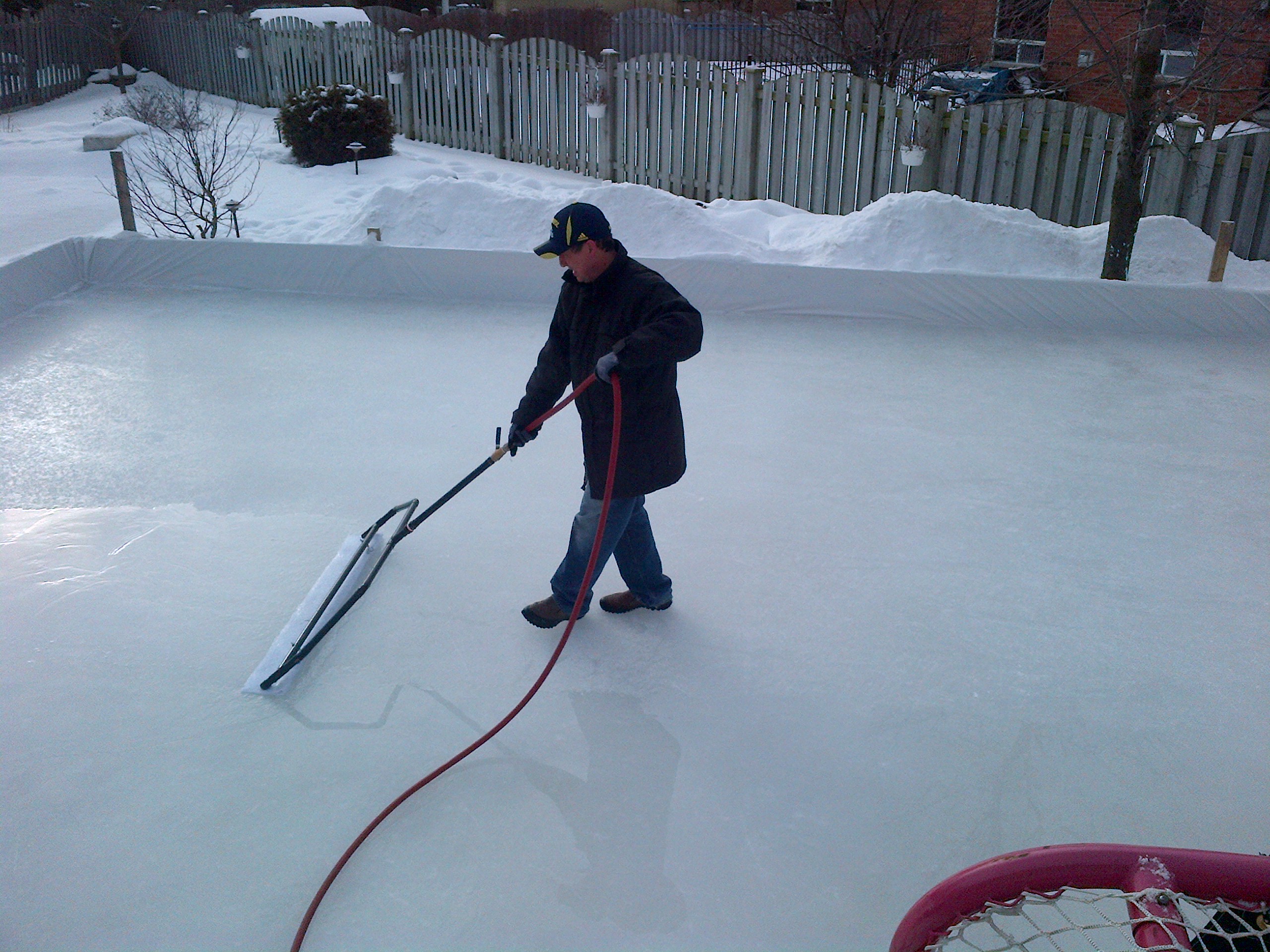 Much of my time is spent shoveling, scraping and flooding throughout the winter months; however, I too, dawn the blades on occasion.  More often than not, I am relegated to the crease where, admittedly, I am a poor excuse for a goalie - clearly illustrated by ill-fitting equipment purchased used to protect me from shots that seemingly get harder every skate.

Mother Nature has tried to break me over the years.  Making ice in a mild Southern Ontario climate certainly has it's challenges...and for 7 straight years, I proudly went au naturale.  But, the lure of modern technology eventually got the better of me. So, with help from my friends at Custom Ice Rinks, I put the sleepless nights behind me with the installation of a refrigeration system that allows me to start the backyard season much earlier and stretch it further into spring.

My neighbors, many of whom are enjoying retirement, seem to enjoy watching the annual transformation as our pool paradise gives way to a hockey haven; although, some have suggested I may now qualify for status if my colleague, Bob McKenzie, decides to update his book, Hockey Dad:  True Confessions From a (Crazy) Hockey Parent.

Chances are, many who read this article will have a story or memory that takes them back. 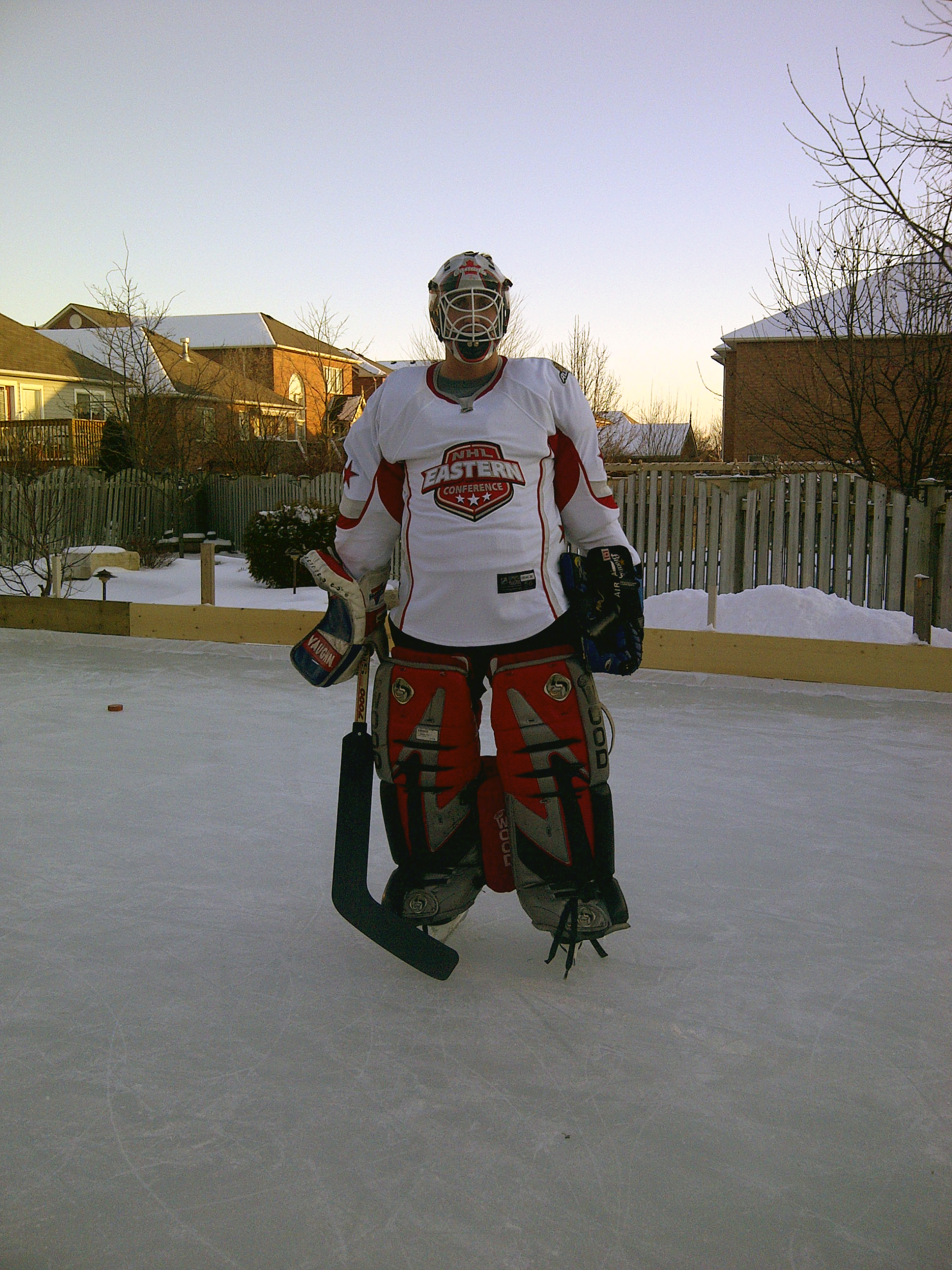 I am always surprised by the feedback I receive from the pictures and updates I post on-line and on twitter from NHL players, coaches, and executives.  Next to trade speculation, progress reports on my backyard rink are always high priority.

Based on the ages of my children, there will soon come a time when a 40 x 25 sheet just doesn't cut it.  This will truly test my obsession and, perhaps, my marriage as I build a case for the necessity of more property.

I love my wife.  Sure going to miss her.