How he looks at development and the parent-coaching relationship

Ray Ferraro is a former NHL player and current NHL and World Juniors analyst. He holds the single season goal scoring record in the WHL and played over two decades in the pros.

He’s also a sports parent, with four kids who played everything from hockey to soccer. Ferraro’s seen first hand how the game and the parent-coach relationship have changed over time and shared his coaching philosophy on Breakaway, the Minor Hockey Podcast.

“My goal is to make your son or daughter be better in April than they are in September. I’m not sure how many games we are going to win but we will be competitive, we will play with the puck as much as possible,” said Ferraro. “I will try to teach as much awareness is possible, so when the puck comes to your kid, they can see what the next play is. We might turn the puck over, because we’re trying to make the next play and it’s not the right play, but that’s just fine.”

Ferraro believes coaches need to be lenient when their player makes a mistake, and use their role as a coach to help them through what happened.

“Let them make mistakes. Teach them out of their mistakes. If they never make a mistake, what are you doing as a coach? Coach. Help. Support. If they screw up, teach them so they don’t do it again. And if they do it again, teach them again. That’s the whole point of minor hockey and sport. We do it with math, why don’t we do it with sport?” 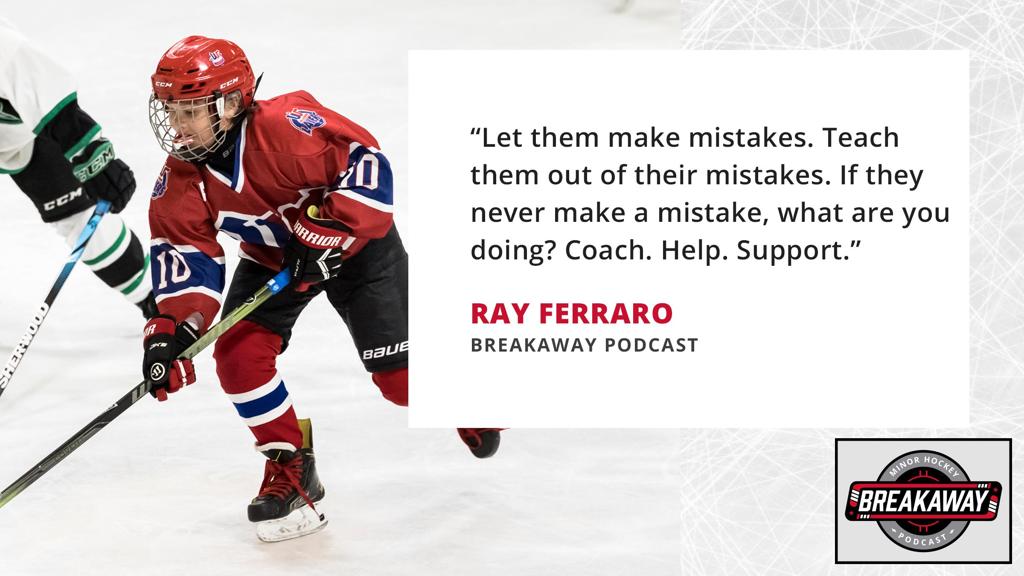 He acknowledges the emotion in parents watching their kids play. He understands what’s involved in the experience, wanting them to do the best they can and enjoy it. When that crosses into getting involved in coaching and undermining the coach’s message, the parent may need to take a step back.

“The parent that gets so emotionally involved that they can only see the small picture is really losing the plot. I’m not saying it’s easy because I know it’s not. Everything feels like it revolves around your child. At the end of it, if you can just take a step back after your child had a bad night, just sit down for five minutes and take stock and go ‘was that really the end of the world or was that one bad day?’ Name me a player that’s had 100 good games in a row. It just doesn’t happen that way.”