The Importance of Attacking off the Rush, with Paul McFarland

Why always watching the puck is very important

What many don’t know about McFarland, a 36-year-old from Richmond Hill, Ontario, is that not only did he he play four seasons at Acadia University (captaining three of them), but when his university career ended, the school created – from scratch – the Paul McFarland Captain in the Community Award, to recognize students for the successful combination of academics, athletics and involvement with the community.

If that doesn’t speak to the character and leadership of McFarland, nothing will.

When McFarland, who also played four seasons in the OHL split between Windsor and Kitchener (where he captured the 2003 Memorial Cup) speaks, he owns the room and commands respect. Anyone in attendance at TCS Live in Ann Arbor this past June can attest to that.

McFarland’s 25-minute presentation on The Importance of Entries and Attacking Off The Rush is a tactical masterpiece that explores why it’s important to attack off the rush, where these plays begin, and key fundamentals, execution and principles that the Kraken work through to get better.

McFarland also provides a life lesson very early in the presentation on why always watching the puck is very important. 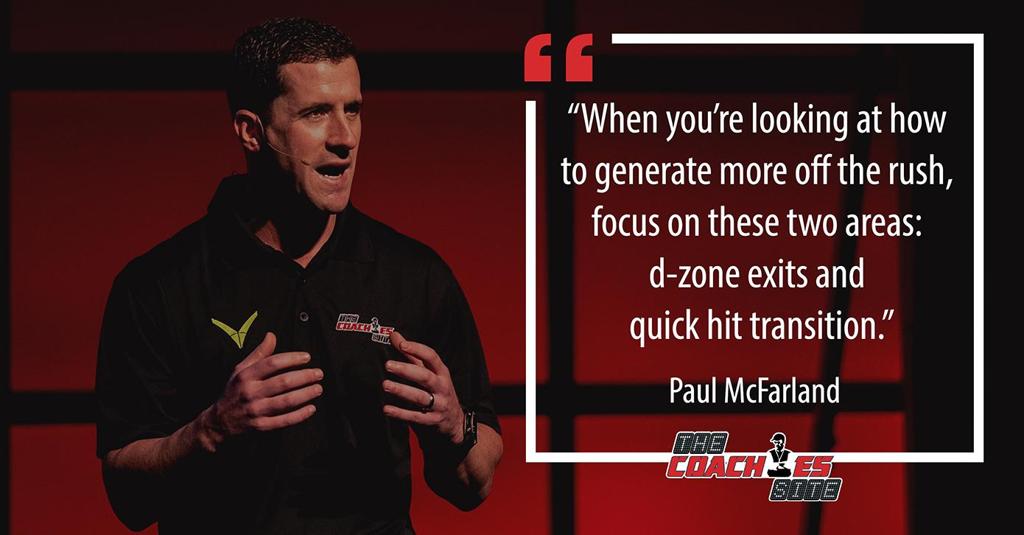 “If you take nothing else away from my presentation, I have this first clip that I hope all of us as coaches can learn from,” McFarland laughs. “This is a clip from us playing in December, we’re playing the Edmonton Oilers. I’m on the bench, looking at an iPad. Now, technology does great things as coaches, all this different technology we have allows us to watch the game and see things back, but this is an example where I should have been watching the game. There’s the flip-backhand, there’s myself and I took a puck straight to the head. Not my best day!”

Become a member of The Coaches Site to watch McFarland’s entire presentation, along with 500+ hours of video from hockey’s top coaches, leaders and performance experts.