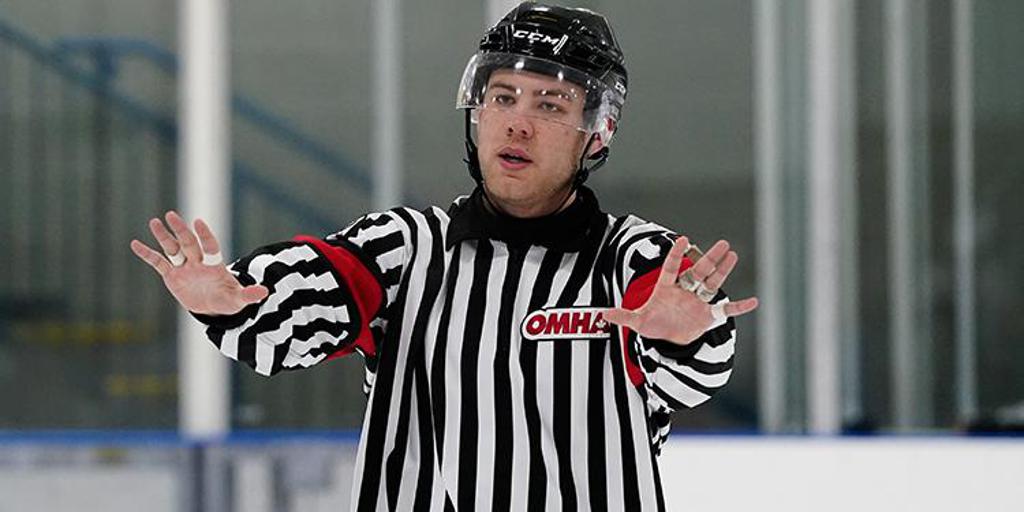 The puck has dropped on the Capital City Challenge and a familiar face at OMHA rinks is part of the officiating crew.

Nick Selkirk from Barrie is donning the stripes as part of this exciting one-time event - a four-team tournament featuring Canada’s National Women’s Team and three national men’s under-17 teams taking place in Ottawa from November 26 to December 1.

Currently a student in the Pre-service Firefighter Education and Training at Georgian College, Selkirk also officiates AAA and Junior hockey and is a volunteer trainer for the Barrie Jr. Colts U18 AAA team. He’s had the opportunity to work Championships and the Ontario Winter Games and has carried his skills he’s learned to off of the ice.

“I've learned a lot of life skills, like conflict resolution. Communication is super key when it comes to refereeing. I've taken some of the stuff that I've learned and brought it into real life like communicating with people and coaches on the ice when I'm doing games,” said the 22-year-old Selkirk. “Teamwork is huge with refereeing and working as a crew to achieve the one goal that we have, which is have a good time, but also referee a good game as well.”

Selkirk started refereeing at 16 after a push from his parents. After wanting to stay in the game once he was done minor hockey, he realized the opportunity of giving back to the sport and being involved.

A former defenceman, Selkirk finds the skating patterns similar as a referee.

“It's a lot of forwards and backwards. So as a referee, you're doing those hard cuts. You're doing that backwards skate to try and get to the net. It’s using your edges and that's the same thing that the defence did.”

He describes being called upon for the Capital City Challenge as an amazing feeling and is looking forward to the high level of hockey. It’s something he’s worked towards over his six years of officiating and is glad he stuck through it when he first started.

“You meet a lot of great people that can have a huge impact. I've made relationships with a bunch of the referees and will be friends for a lifetime. My advice would be just to enjoy it. I started at the bottom of the totem pole doing the skates early in the morning, it's still an awesome opportunity. Because I look back on in it and that's where I started and look where I am now.”