The Growth of Midget Hockey

Ahead of this weekend’s OHL Priority Selection and next week’s debut of the OHL Midget Draft the spotlight on the growth of Midget hockey has rarely shined brighter. Still playing high quality hockey, the new OHL Midget Draft is another opportunity for players who have possibly been overlooked or needed an extra year to develop their skills to get their shot at the next level.

“Midget hockey in Ontario features hundreds of talented players who continue to develop their game,” said OHL Commissioner, David Branch in a press release. “Working with our Minor Hockey partners, the OHL Under-18 Priority Selection will serve to assist in the continued growth of Midget hockey and provide further opportunities for players at different stages of their overall hockey development.”

We spoke with Oakville Rangers Midget AAA coach Mike Bentivegna about his passion for Midget hockey and why the program is so great for players.

I’ve been coaching in the Oakville Midget age group for five years now. We’ve been lucky to have some success but I wouldn’t put success for our program in wins or losses. For us, the success is watching our players go on to the next level and move on to Junior A, B, OHL. A few of my players from five years ago are now committed to the NCAA and are playing in the OHL. That, to me, is more success than on the ice. It’s kind of like a Catch-22. When you have that success of moving players on, you attract players to stay in Oakville and compete for the program and that leads to wins and losses.

What is the key to a successful program?

The key for us is, honestly, moving these players to the next level and making sure that they’re going to places where they’re going to play. They’re not going to Junior programs to sit in the stands or on the bench, they’re going to be impact players. If that means spending another year in Midget or as a 16-year-old, not playing and playing one year in Midget and going in there and being a contributor right away, they don’t have to go there and sit in the stands or on the bench and worry about practice when you get to experience in games for us and AP (Alternate Player) with (Junior) teams.

What steps did you take to create a successful program?

What we do is we want to stay as local as possible, an Oakville kid. What we help with is we go out, and if they don’t have an AP spot, we’ll work on helping them get an AP spot. Then make sure with the Junior teams in our area, there’s plenty, make sure they’re heading to practice with these teams, games if necessary. We try to run our program like a Junior program. Communication to the players, off-ice, on-ice, practices, we try to emulate a Junior program as much as possible. So when they get there, they know what to expect and they attract players to our program through a lot of word of mouth. 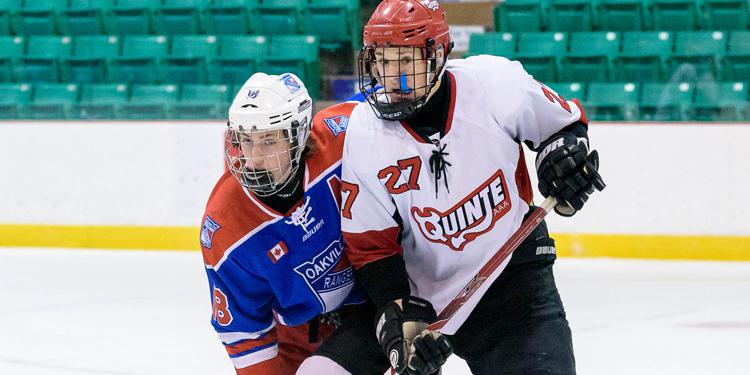 What is the biggest misconception about Midget hockey?

The biggest misconception is that if you aren’t drafted or drafted too late that you have to play Midget and hockey is over. Midget hockey, if you look through the top teams in the OMHA in the last four or five years, those top players are very, very big contributors in the OHL, OJHL, CCHL, and a lot of those players are receiving NCAA scholarships or looks after playing a year or two of Midget. The development stream is not one perfect one for everyone. There’s people that are later bloomers and Midget hockey doesn’t end your hockey dream. For some people, it starts it.

Do you think Midget hockey gives overlooked players a chance to be seen?

It absolutely gives overlooked players a chance. It gives them a chance to be looked at but it gives them a chance to continue developing and development is the key to any successful program. You need to work with these players. You need to give them the individualized attention because not everybody learns the same way and not everybody sees the same thing.

What are some of the benefits of playing Midget hockey over Junior?

I would say the ice time and the development through that is major in Midget hockey. The key to these players is they have to get ice time, they have to play. You don’t want to go and sit in the stands or sit on the bench, you have to play. In Midget, you play, you develop and you learn all situations of the game as well.

What would you tell a Minor Midget player this year about coming to Midget?

I’m not sure yet. What I think it’s going to do is take all the bubble players that didn’t get drafted and are thinking about other options or thinking about possibly quitting hockey and focusing on academics are going to stick around and give the Midget league in Ontario another chance.

Every year there’s guys you can say, ‘I can’t believe that player went undrafted.’ And that would give them a chance to prove everybody wrong. There’s nothing more powerful than a 16-year-old that wants to prove people wrong in a positive way.