The Next Ones - AAA Showcase 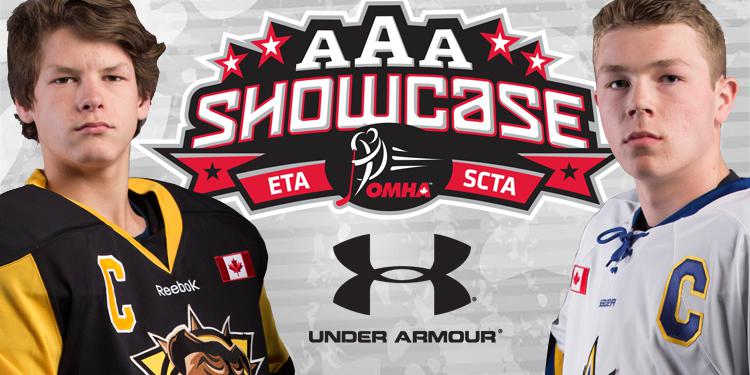 The great ones that grew up playing in the Ontario Minor Hockey Association have taken their places at the next level of hockey. Now, the #NextOnes like Hamilton Jr. Bulldogs forward Tanner McEachern and Brayden Guy of the Brampton 45's will take to the ice at the Ontario Minor Hockey Association’s Minor Midget AAA Showcase powered by Under Armour in St. Catharines on January 28 and 29.

Ten Ontario Minor Hockey Association teams from the South-Central AAA Minor Midget League will battle head-to-head in a series of games in front of pro, junior and university scouts at the Seymour Hannah Sports and Entertainment Centre. The event is a preview of the top picks in next spring’s Ontario Hockey League draft and, in a few short years, the National Hockey League draft. The OMHA is a premier development league with 86 players drafted from 19 different teams at the 2016 Ontario Hockey League Priority Selection, including five first round picks.

A list of players to watch, including McEachern and Guy, are listed below.

The weekend will also include the OMHA Eastern AAA vs. South-Central AAA Midget All-Star Game along with a South Central AAA Bantam Prospects game. The South Central AAA Bantam Prospects will also take part in the OMHA Combine powered by Under Armour. All 40 players will be put through both off-ice and on-ice drills by Sport Testing, measuring their speed, agility and power. The Combine will be hosted at Ridley College on the morning of Saturday January 28th. The rosters for both All-Star Games can be found at the bottom of the page.

“I remember (the Showcase) being loads of fun,” said Adam McMaster, who played in last year’s Showcase and was a first round pick of the OHL’s North Bay Battalion. “Obviously it’s pressure playing in front of scouts but I just remember it being lots of fun being with your teammates… It’s two games in two days and you’re spending both days with all the guys. It’s really memorable and it’s something I won’t forget for a while.”

"The Ontario Minor Hockey Association has consistently developed bonafide prospects for the OHL year in and year out,” said Jason Ford, Barrie Colts General Manager and Head Scout.  “This type of setting with all of the teams in the league playing in one place allows us to evaluate the league as a whole, and saves us a lot of time moving forward. This Showcase provides us with more information on players we are interesting in pursuing, and helps us pinpoint who we want to pay more attention to as the season goes on." 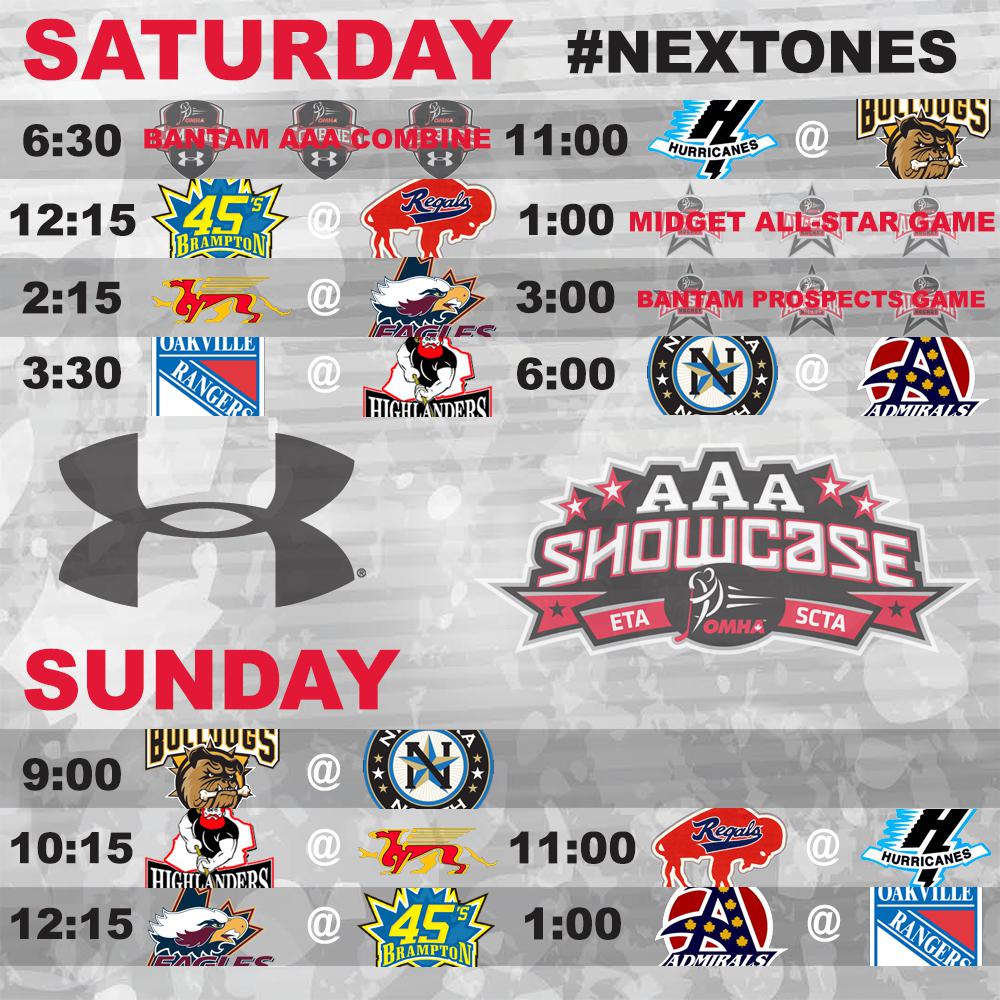 “The Ontario Minor Hockey Association has a long and proud tradition of developing some of the top hockey talent in the world,” said OMHA President Rob Ring. “This event will be a step in identifying and developing the next crop of elite players in Ontario.”

“The Ontario Hockey League offers student-athletes the best of both worlds when it comes to on ice development and opportunities in education,” said OHL Commissioner David Branch. “We look forward to the opportunity to meet so many of the OMHA’s great student-athletes and future stars of the OHL at these events.”

The captain of the 45's, Guy is a good-sized winger that plays a 200-foot game. His shot is already better than most OHL players and he is one of the smartest player in the SCTA. He is a good teammate, has great character, and makes his teammates better – all important ingredients that go into being a successful captain.

Horsley is dominating the SCTA this season. He leads the league in goals and is tied for the lead in points. A power-forward with the prototypical power-forward body, Horsley does a good job marrying an excellent skill set, with good skating, and a sound physical game. He has a presence on the ice and is dangerous every time he has the puck in the offensive zone.

Krawiec frequently uses his skating ability and compete level to generate chances off the rush. He's a good skater with quick feet and a good first step. Krawiec puts forth a good effort in puck battles at both ends of the ice and has good skills which includes a quick and accurate shot.

Klazer is a smooth skating defender with the capabilities to skate himself out of trouble when needed. He has also played upfront this season and been effective on the wing. Whichever he plays, Klazer has been an offensive catalyst on his team – his good skill level and hockey smarts are two big reasons for this.

Lightfoot is coming off an impressive performance at the Peterborough Tournament of Champions last weekend, leading the event in scoring with nine points. The captain of his team, Lightfoot is a very hard worker, very skilled and skates well. He is effective in all three zones and logs a lot of quality minutes for his team.

The younger brother of 2016 Team OMHA Gold Cup participant and Saginaw Spirit draft pick Mitch Morrison, Logan starting to make a name for himself at a very young age. An underager at just 14 years old, Morrison is a lot of times the best player on the ice for either team. He has high-end skill and puts forth a good effort each and every shift. However, like all the great players, what separates him from his peer group is his excellent hockey sense and an uncanny ability to anticipate the play. He should be a very high OHL draft choice in 2018.

Gordon is quietly becoming one of the best players in the SCTA. He has a lot of ability that includes an excellent shot. A really good scorer, Gordon is smart, creative, mentally engaged, generates offence and is a player that has lots of upside.

One of the best skating defenceman available in the 2017 OHL Draft, Peric has a good transition game and handles the puck well. A smart hockey player with good instincts, he constantly keeps his head up and on a swivel surveying options around him.

It's tough not to like Hazell’s game. A big, strong centreman, he plays an effective 200-foot game. He has really good skills and generates a lot of offence. One of the more impressive feats by Hazell this season, is that for a player with such a high compete level and consistently being in the play, he currently sits at zero PIMs.

Houston brings a lot to the game – he skates really well, has a lot of ability, makes plays at a high pace, and has a very high hockey IQ. One of the most exciting players in the SCTA, he generates a lot of offence. Houston is also effective on the d-side of the puck – he has a consistent compete level and works relentlessly on the back check tracking pucks through the neutral zone creating turnovers and counter attacks.

Stepien plays a strong 200-foot physical game, going in hard on the fore check as well as competing down low in the defensive zone helping his defenders create counter chances off turnovers and loose pucks. He has excellent skills and the puck seems to follow him in the offensive zone. Stepien has an excellent shot and is one of the best goal scorers in the SCTA. He tends to step up his game during critical situations.

Butterfield is very effective on the d-side of the puck. He plays a tight gap and uses his stick well. The big-bodied d-man has a good physical game and compete level – each and every shift he is looking to make a difference. Butterfield understands the game well and plays a lot of quality minutes.

The straw that stirs the drink for the Rangers, Hiebert does a little bit of everything for his team. He has good mobility, good hockey sense, and very good skills. The captain of his team, he communicates well on the ice with his teammates, has a good compete level, and all in all is a very good teammate that strives to make those around him better.

Another impressive underager playing in the SCTA, Ambrosio has high-end skill and an excellent shot. An effective sniper that is shoot first, he has an uncanny ability to score goals. Ambrosio has the ability to beat defenders one-one-one and to create something from nothing. Once he becomes bigger and stronger as he gets older he will become even more effective. 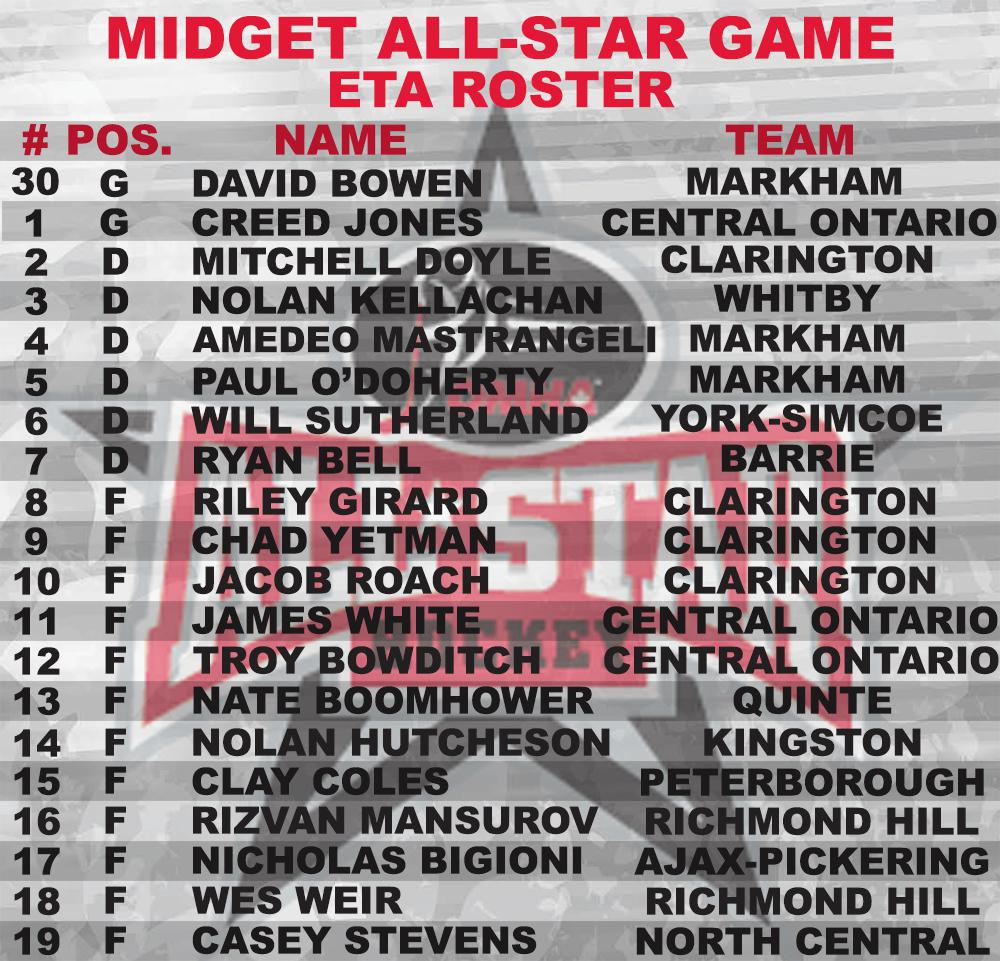 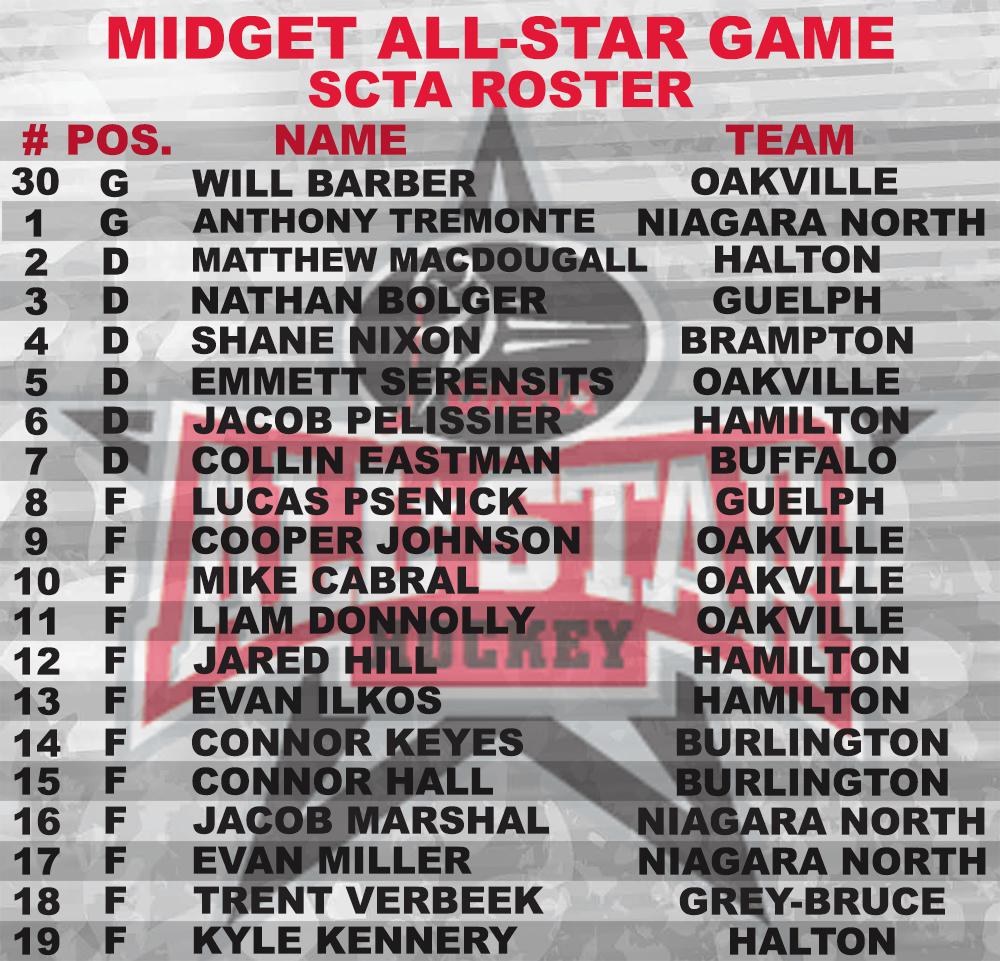 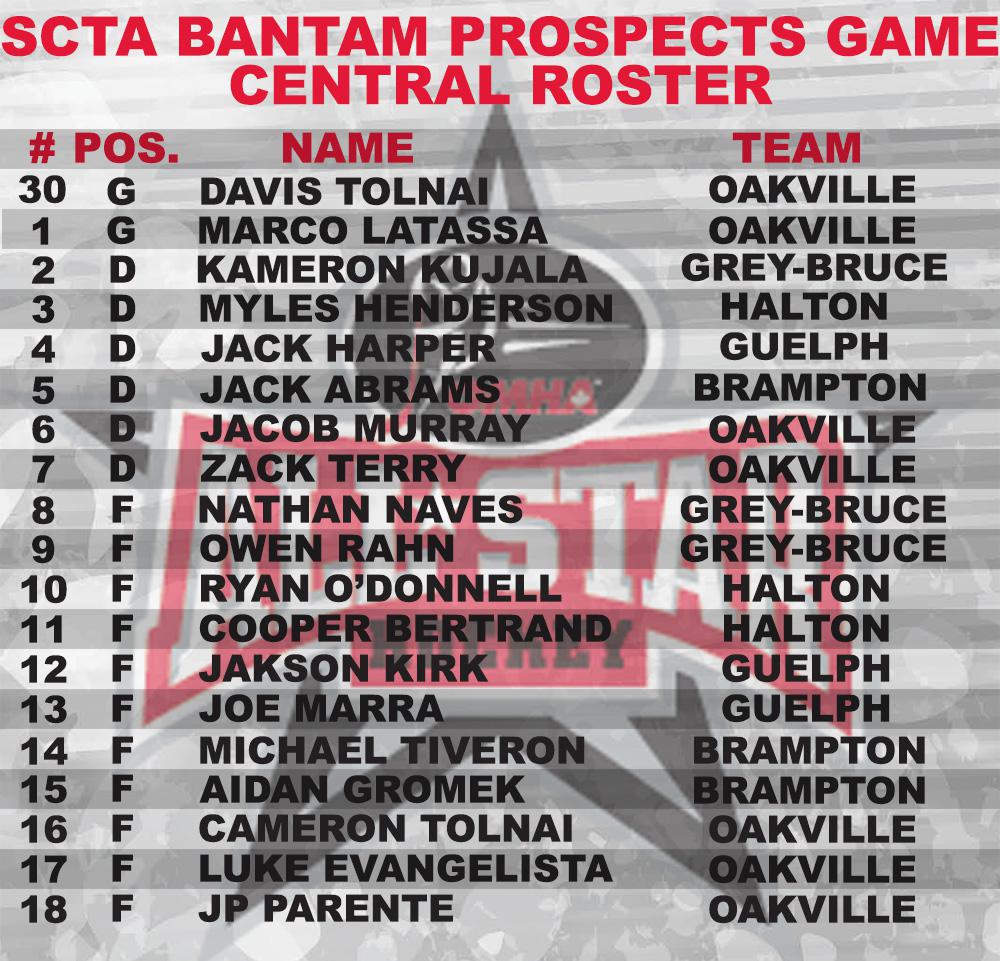 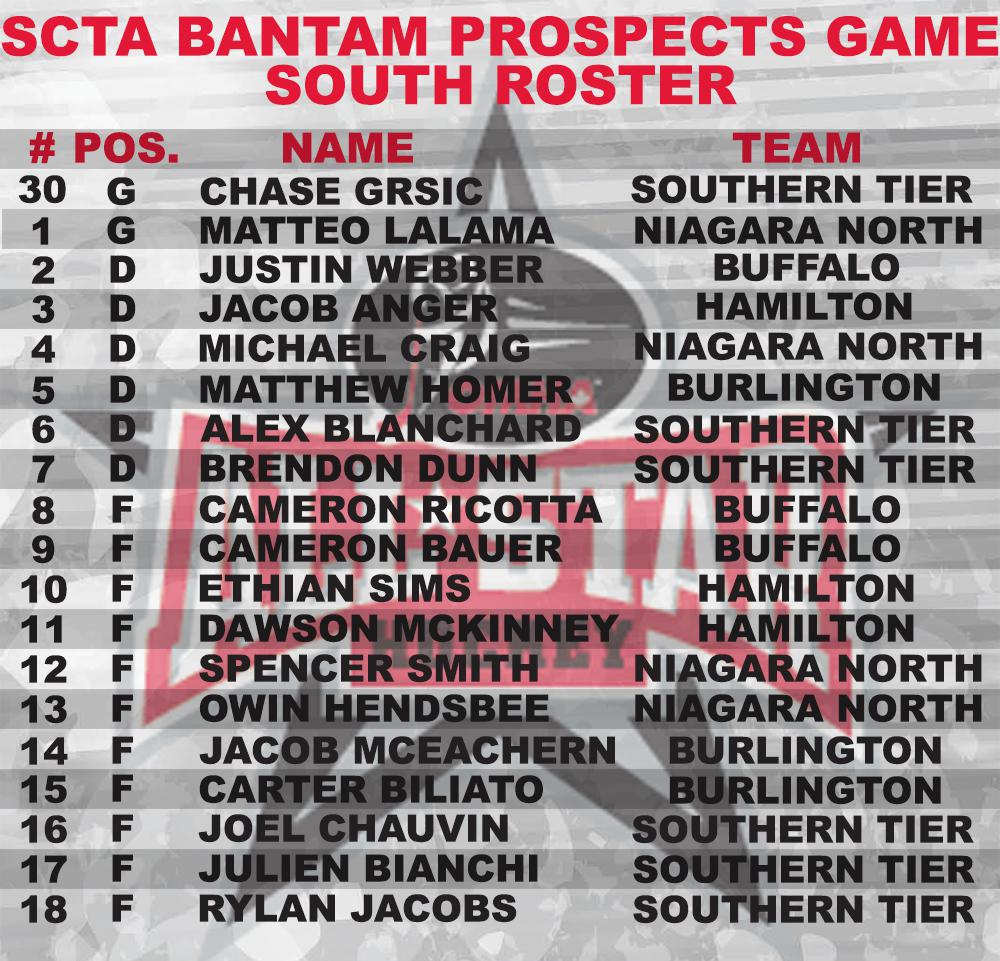