Growing up, kids dedicate countless hours of their lives to lacing up the skates and spending time with their friends on the ice. They spend months of the year with the same group of teammates and form close friendships that carry on from Atom to Midget, learning life skills along the way. From tournament road trips to mini sticks at hotels, sports offer a unique chance for players to bond together through more than just the game. Hockey helps to create better people, and it is these experiences off the ice that teach these important life skills.

Being a teammate means a lot of things. It introduces players to a whole new group of friends and also provides a crucial support system. Players work together to achieve a common goal and grow confidence in themselves to become leaders. Some of those players become captain.

The Ontario Minor Hockey Association creates an environment of minor hockey that is about more than wins and losses. The players of today are the citizens of tomorrow and hockey promotes the attributes of respect and skill-building through hard work and having fun. Many of our alumni credit the lessons they learned playing minor hockey for shaping them into who they are today in the Ontario Hockey League.

The role of captain on a hockey team carries many responsibilities. The team feels that this is the best person to represent what they are about. The chosen player, whether selected by the coaching staff or voted by teammates, is responsible for being the leader of the team. It goes a lot deeper than just having a letter on the jersey.

“This is the first time that I’ve actually ever worn the ‘C’ so a big, big part of who and where my leadership comes from, the biggest thing I like to focus on is that not everyone has to wear a letter to be a leader,” said Garrett McFadden (Grey-Bruce Highlanders), captain of the Guelph Storm. “I think that’s one of the biggest lessons that I’ve learned over the years. Everyone can show leadership even though maybe they don’t have something on their jersey to show that they’re one of the most leaned-on leaders on the team.”

“Being a leader in that way, having a letter, I don’t know if it’s the biggest deal to have a letter but it’s an honour to wear one,” said Hamilton Bulldogs captain Justin Lemcke (Whitby Wildcats). “The guys that don’t have letters, we still have a lot of leaders in the room not wearing letters, they know who they are, I think you need guys like that on your team.” 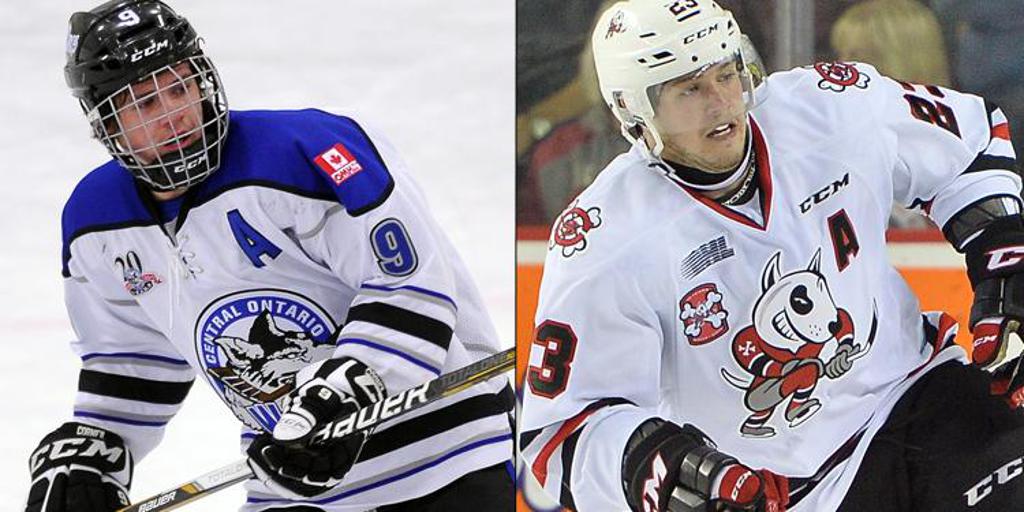 Johnny Corneil with the Central Ontario Wolves and Niagara IceDogs

If players don’t think that their teammates or people around them aren’t taking note of their actions on and off the ice, that simply isn’t the case according to McFadden. He isn’t the only one to notice the added attention, and the spotlight on those in leadership positions is always greater. It can have an impact on those around you.

“People definitely take notice of the way you act and the way you treat others around your town and other members of your family and team,” said Peterborough Petes assistant captain Matt Spencer (Oakville Rangers). “I’d say the biggest thing is make sure that you’re always giving your one hundred percent work ethic to everybody around you because it’s not only going to make you a better person but it will make everyone else better too.”

Every leader has someone they look to emulate in their role. For many hockey players, their former teammates usually end up having the largest influence on how they operate in the locker room.

With so many personalities on a team, it’s the captain’s job to bring everyone in and work together. It can be difficult when there are so many unique leadership styles but that’s not necessarily a bad thing. Some players respond better to different ways of communication.

“I think that’s very important within a team, to have those different types of leaders. You don’t want a bunch of different guys coming at you the same way, you want to have a bit of variety,” said Spencer. “I think that’s the key component to a winning team.”

Even within the team, the leadership core carries an extra amount of responsibility. Typically, teams have one captain and either two or three assistant captains. Together, they are in charge of being the line of communication between the coaching staff and the rest of the players.

“We talk a lot and get together with the coaches a little bit,” said Johnny Corneil (Central Ontario Wolves), assistant captain of the Niagara IceDogs. “We kind of let them know what’s going on as far as in the team ourselves, with the younger guys and how everybody’s clicking, how things are going.” 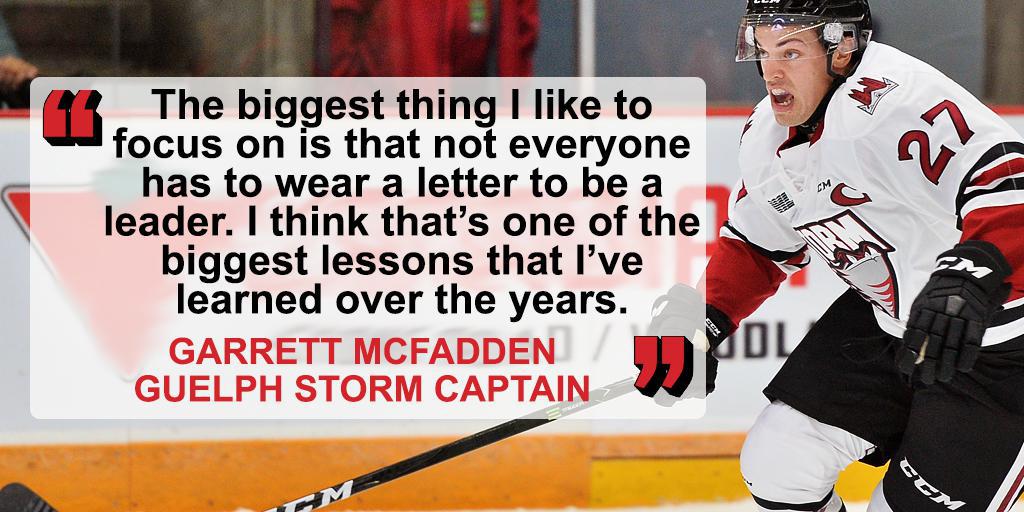 “You need to be communicating together and have a close relationship,” said Barrie Colts captain Cordell James (Hamilton Jr. Bulldogs). “With the assistant captains, some of them are my linemates so we have good chemistry and we all have to be on the same page. Same with the coaches, they tell us stuff and we have to relay the message to the other players so you have to have a close relationship with them.”

Being a part of the leadership group often means that you’re the first player that comes to mind when the team is looking for a representative. With the added attention, players like McFadden are using this platform as a way to help spread a positive message and give back to the hockey community.

Earlier in the year, the Kincardine native launched McFadden’s Movement, a mental health initiative inspired by losing a family friend to suicide in high school. McFadden wants to use the position of his new role to speak to younger kids about mental health.

“With the voice that I have and the position that I’m in the city of Guelph and the opportunity that I have to talk to young kids every single day is something that I want to take advantage of. When I got the idea to start McFadden’s Movement, I got a lot of help from the Storm.”

McFadden has reached out to his former Grey-Bruce Highlanders organization in an effort to speak to minor hockey players who are growing up in his hometown area. He feels he has a responsibility to give back to his community.

If anyone can relate to what it’s like having a hometown hero coming back to his roots, it’s Corneil. Being a graduate of the Central Ontario Wolves means that he watched fellow Wolves grad and current Colorado Avalanche star Matt Duchene play a lot growing up. Duchene is a leader that Corneil tries to model himself after and continue the cycle of positive leadership for the next generation of players.

“He was always the leader of his team and he always took control on the ice,” said Corneil. “From what I knew of him off the ice, he was a leader and led by example off the ice. Being from near my home, I always looked up to him and tried to follow in his footsteps a bit.” 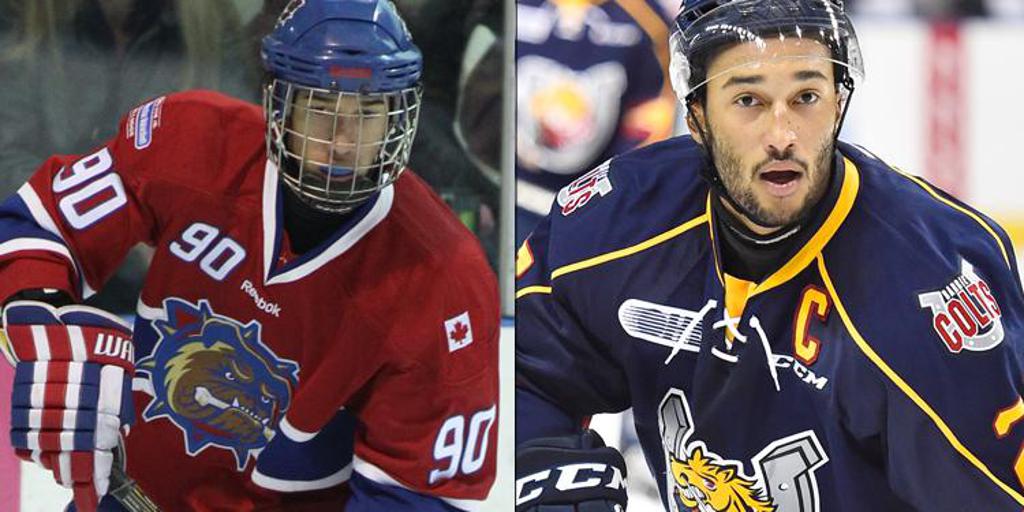 Cordell James with the Hamilton Jr. Bulldogs and Barrie Colts

Growing into a leader all started from playing hometown hockey and even those in the Ontario Hockey League today still hold those experiences close to them.

“I always played with a great group of guys, playing at home. We grew together, we had the same core of the team right from when we were young all the way until Midget, so we did grow together,” said Corneil.

McFadden remembers it the same way. Raised in Kincardine and playing with the Highlanders required a lot of travel for the defenceman, sometimes over an hour just to get to practice. In turn, that made him closer with his teammates and a big reason why he still tries to hang around the local rink when possible.

“It was pretty cool. You come from a small town and you play with a lot of guys who are also from smaller towns,” said McFadden. “You get together and you’re travelling all over Ontario and playing against city teams and kids that have been playing together for a long time. It was definitely unique, for sure.”

Many junior players still carry the lessons they learned in minor hockey and find that they still apply today. From respect to education to giving thanks, the parallels between every level of the hockey world seem to reflect one another. 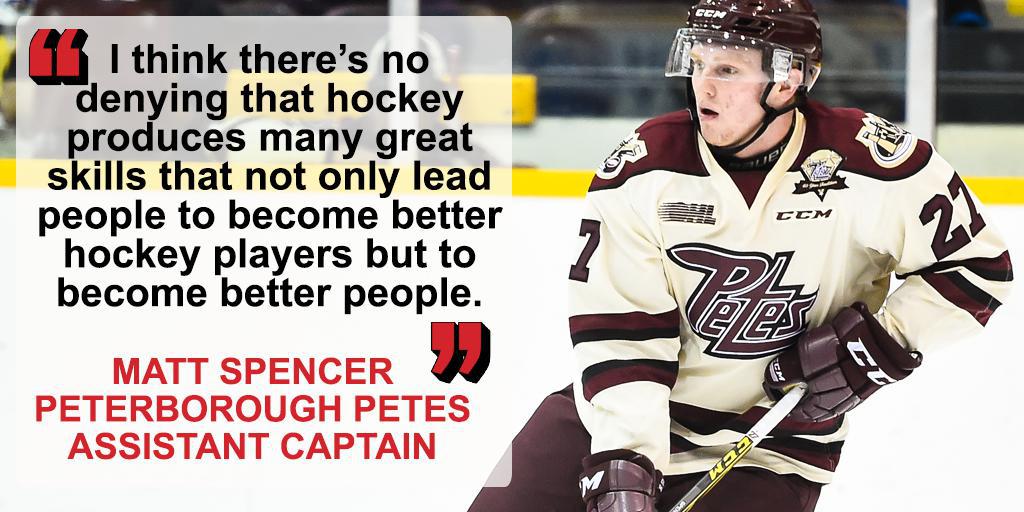 If anything, it seems the older you get, the less that excuses will be accepted and the responsibility to be accountable grows.

“It’s really important obviously to focus on school. That’s stressed quite a bit when you come to the OHL, it’s not like you take a step back from school,” said Lemcke. “It’s almost like they’re more intense on you. You’re not allowed to miss school because you were out late the night before for a game.”

The message these captains want to give to minor hockey players was nearly unanimous. It’s about respecting those around you, being the hardest worker and leading by example in your community. A combination of those traits will help make you a better person off the ice.

“I think the first thing that comes to mind when you look at a hockey player is that you have to respect everything,” said McFadden. “Whether it’s your coaches or your teammates or the guys you’re playing against, the guys who flood the ice, I think respect is probably one of the most important values that a hockey player should carry with them and that’s going to make them into a better person in and out of the community.”