Skills. Skills. Skills. This has been the mantra repeated since the days of Lloyd Percival, Howie Meeker and the ’72 Summit Series. It was echoed by former Team Canada World Juniors Head Coach Brent Sutter in 2015: “There’s too much focus on winning and losing at such a young age and not enough about the skill part of it and the skating part of it, because that’s truly where it starts,” he said. “I’d personally like to see more skill, more creativity, because we had to play against it here and we got beat by it some nights. Development starts at Bantam age, at Peewee age, development starts at 10 years of age”.

Without question, technical skills provide the foundation for a young player’s ability to play the game and will fuel their continued enjoyment of the game. But, are our players less skilled?

This is where the gap between Skills and Systems begins (especially when the coach isn’t the one delivering the skills training). We now see teams with players who can all skate and stickhandle but they play robotic hockey, they don’t use their skill in creative ways – their skill does not link with the ‘system’ the coach has put in place. Dump…chase…change. Dump…chase…change.

“I think one of the concerns that we have with coaching at the lower levels is that too many coaches are coaching to win,” said Paul Carson, vice-president of membership development for Hockey Canada. “In doing so, they are putting hand-brakes on the offensive side of the game, trying to keep the puck out of the net, and then working for one or two opportunities a game to score.

And it’s also in that gap that lies a term we hear and use all the time … ‘hockey sense’. 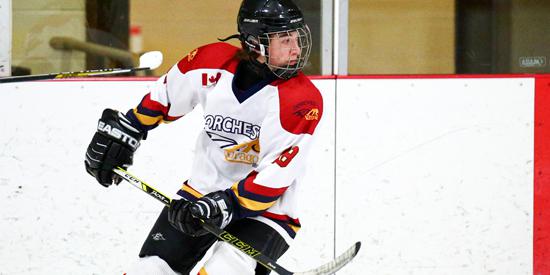 Hockey Canada’s Skill Development Pyramid provides a very clear progression starting at the base of the triangle emphasizing the development of fundamental skills. As the pyramid is climbed, a greater emphasis is placed on individual tactics; adding the dimension of ‘hockey sense’ to skill development.

“There is too much emphasis on ‘systems’ and not enough on creativity in youth hockey. It’s stifling.” That from Wayne Gretzky, a player who could see the ice and read and react and anticipate like no other player in the history of the game.

Bobby Orr, the player that redefined what a defenceman could do, said this "Many coaches today would never let a defenceman try some of the things I was allowed to try, and that is a pity. I often wonder if any coach would let me play the game the way I wanted to play if I were playing today. Something tells me I might be collecting a lot of slivers on the bench if I were playing minor hockey today.”

So what is ‘hockey sense’ and how can you teach it? Many coaches will stop you right there! Teach hockey sense? It can’t be done!

Is ‘hockey sense’ a teachable skill? Absolutely! Once a player has developed the skills of skating and puck handling then the individual tactic can be learned. The player now understands the “why” of each tactic which means their read and react skills are being developed.

LTPD expert Dr. Stephen Norris defines Athletic Excellence as the ability to maintain technical excellence at speed, under pressure, when fatigued. So, are we developing hockey players with this in mind?

In many cases, skills are taught in isolation, such as skating without pucks, stationary shooting, stickhandling around cones. Practicing in isolation does not reflect what happens in constantly changing game situations. Decision-making is what determines success in any sport and it is the cornerstone of ‘hockey sense’. Hockey is a fluid game that features hundreds of transition situations – offence to defence and vice versa – in every game.

This means that players today must have good physical abilities, good skills and mental abilities including the ability to think in cooperation with other players on the team. They must analyze (read) and find a solution (react) to any given situation quickly and accurately.

“The challenge is how we back off that winning is everything and say, ‘Let’s look at other performance indicators to say whether or not coaches are being successful in what they are teaching young kids.’ So it’s teaching three-on-three, it’s about small areas of games, it’s about having the puck on your stick, it’s about learning how to support the puck carrier, it’s about advancing the puck in an offensive frame of mind,” added Carson.

This is where the coach is crucial – before moving into systems - coaches need to design practices that incorporate ‘game-situations’ practices where they are empowered to think, make quick decisions and problem-solve in an highly motivated and competitive environment. If we don’t expose players to situations they will face in a game, then we are simply not maximizing the development potential of our players. Mind the gap!

The OMHA continues to celebrate and foster skill development through Coach Education programming such as Specialty Clinics and player development programs such as the 5000 Puck Challenge, 10,000 Touches, and resource videos on the OMHA YouTube channel.