Hamilton Bulldog shares his secret to success in hockey: having fun!

Connor Crisp is new on the professional hockey scene, but there is one lesson that he’s been able to carry with him throughout his young career.

You might say it’s the golden rule of sports. It’s the one thing that parents constantly remind their children of before a big game. It’s what your coach tells you right before you take the ice for the Ontario Minor Hockey Association championship game. The lesson is simple: just have fun.

That’s exactly what the 6-3, 218-pound Hamilton Bulldogs forward did during his years with the York Simcoe Express. It’s what he continues to do at the professional level with the Bulldogs, and it’s the message he sends to every other kid trying to make it.

“No matter where you are, hockey is going to be fun for the rest of your life,” says the 20-year-old.

To say that Crisp enjoyed his time in the OMHA would be an understatement. His York Simcoe team won four OMHA championships and one Ontario Hockey Federation championship.  He also enjoyed personal success, netting 31 goals and adding 37 assists in 60 games with the Minor Midget Express.

With numbers like those, you’d think the power forward would try to keep his game the same throughout his career, right?

Wrong. In his time with the Express, Crisp had a natural ability for scoring goals. His size advantage helped his team find success, but he saw this advantage decrease as he progressed on to the Ontario Hockey League and American Hockey League. This forced his approach to the game to change.

“I think my game has changed a lot since minor hockey, just the role that I’ve taken on as a player,” Crisp says.  “I’m more of a power forward than I was back then.”

Crisp’s willingness to change his game is what helped him get to the next level. That, and his ability to put up big numbers in his draft years, taught him countless lessons about dealing with high-pressure situations.

On dealing with the pressure of being drafted out of minor midget, Crisp encourages young players to stick to playing their game.

“You can think about it as much as you want, but its not going to make you any better,” says the 31st overall pick in the 2010 OHL Priority Draft. 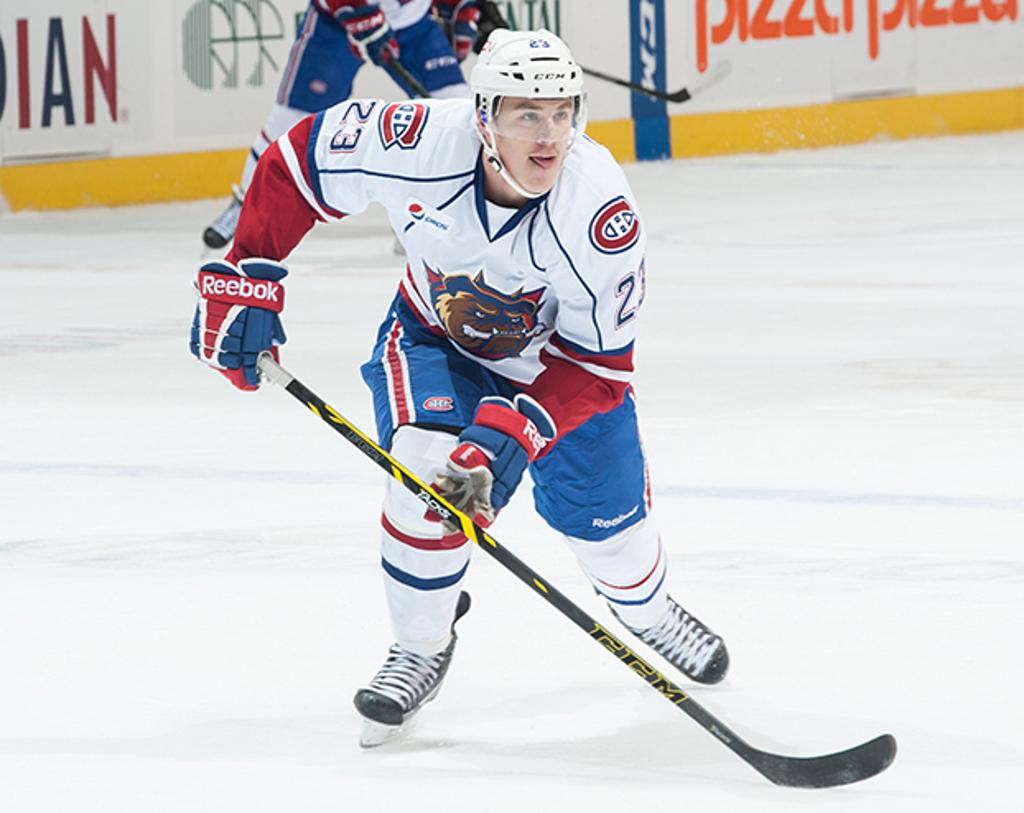 It’s an approach that works. Crisp was rewarded for his mentality and playing ability by getting drafted by the Erie Otters, where his efforts lead to being selected by the Montreal Canadiens 71st overall in the 2013 National Hockey League Entry Draft. They are memories that he will not soon forget, but Crisp also cherishes his days playing for the York Simcoe Express.

“It was always exciting,” recalls the Bulldogs rookie of his AAA team constantly winning championships and advancing on to Sundays in tournaments. “We were always a close team and stayed close together and had fun in the hotels.”

Through all the travel and pressure that comes with playing AAA hockey, Crisp admits that he would not be where is today without some guidance. He credits his family for helping him achieve his dreams, who always drove him to games and practices. They also took countless sick days just to make sure they could support their son during a tournament.

As he moved up in the hockey ranks, he had to adjust to being away from the family that helped him achieve his hockey dreams.

“I think the toughest part is moving away from your family for the first time,” admits the OMHA graduate.  “Especially when you’re four or five hours away from home.”

It was a difficult change to endure, but the lessons learned from AAA hockey are ones that Crisp will continue to use throughout his career.

After all, Crisp’s ability to win championships in the OMHA is something that Bulldogs fans hope the big power forward will bring to Hamilton.