Five high school graduates who made a big impact in their schools and in their communities are being recognized for their academic excellence, minor hockey participation and extracurricular work outside the rink. As hockey players, coaches and referees in the Ontario Minor Hockey Association, they are the inaugural winners of $8,000 post-secondary bursaries from the Dairy Farmers of Ontario.

The recipients are: Ethan Andrews (Grey-Bruce), Adam Huras (New Hamburg), Vincent Robbenhaar (Barrie), Chloe Ryder (Kent) and Andrew Salgo (Guelph). They were selected from the 2019-20 minor hockey season and are currently attending university. Profiles of each recipient, including videos, can be found below.

Thomas King of Whitchurch-Stouffville and Travis Phibbs of Hagersville were also each awarded the Wally Scott Bursary of $1,250 as part of the OMHA’s bursary program.

The Dairy Farmers Ontario Bursary program provides minor hockey players recognition of their outstanding contribution to community service, athletic and academic success. Applications for 2021 Bursary Program will be announced in the coming weeks.

“We are extremely proud of the five recipients chosen for the Dairy Farmers of Ontario Bursary. Each of these student-athletes demonstrates the dedication and commitment needed to succeed on and off the ice,” said Ian Taylor, Executive Director of the OMHA. “Their leadership and desire to give back to hockey and their communities through coaching, officiating and volunteering has positively impacted the lives of many around them. We wish them all the best in their post-secondary education.”

“Congratulations to each of the DFO and OMHA bursary recipients for your outstanding contributions both on and off the ice,” said Murray Sherk, DFO’s Board Chair. “We’re inspired by your passion, hard work and dedication, and are honoured to be a part of your journey in shaping the next generation of leaders.”

Being involved in over 30 clubs would be a handful for any student. Add AAA rep hockey on top of that and you now have an idea of what Ethan Andrews’s life was like in high school.

A graduate of Wellington Heights Secondary School, Andrews was named the school’s Athlete of the Year as well as earning three School Letter awards. He often took classes a grade above and was named an Honour Student. His work ethic and leadership were noted both in the school hallways and on the ice where he was named team captain.

To play AAA hockey in Grey-Bruce meant his closest practices and games were almost an hour away. But the Mt. Forest native excelled with dedication and time management, with coaches describing him as one of the hardest working players they had ever seen.

“Over the course of my high school career, I was part of over 30 clubs and teams. I found it to be a very important part to becoming a very well-rounded individual - not just academically but also in different sports. You should do as many as you possibly can,” Andrews said.

He was on the Athlete’s Council and provided lunches on certain days to the whole school even though he was away studying at Co-op placements.

Dave Griffiths was his Co-op Teacher.

“He wasn’t there at school, but he would have group chat saying what needed to be done. He would be at Co-op but still have the lunch ready for when it was time,” said Griffiths.

In addition to the Athlete’s Council, Andrews also served as the Head of Student Council Finance. He led the school’s Relay for Life, raising over $30,000 for Canadian Cancer Society as well as the Warm Winter Wishes campaign. Andrews helped run an annual charity youth hockey tournament and volunteered as a youth basketball coach.

Winning your school’s math contest four times in three years is impressive. When one of those victories was capturing the Grade 12 contest as a Grade 11 student, it’s certainly bound to get people’s attention.

Adam Huras graduated from Waterloo Oxford District Secondary School last year where he maintained an average in the high-90s throughout his time. He was an active participant in the school’s extracurriculars such as, hockey, cross-country, track and the monthly math contests.

Huras played with the New Hamburg Minor Hockey Association for 11 years and was named captain in his final season. He also worked as a referee and timekeeper.

“Even when I was not playing hockey, I still wanted to be involved in the game and have a positive impact on other young hockey players in my community,” Huras said.

Huras said the skills he learned as a referee including problem solving, thinking quickly on his feet and working independently will help him at university.

“Refereeing has helped me improve my communications skills, whether it be with the players telling them when they are offside - the young players don’t always know - and communicating with the coaches.”

Even with all the time dedicated to his studies and hockey, Huras still found time to volunteer with a younger team and helped run their practices.

He is now a student at the University of Waterloo in the Mechatronics Engineering program.

From the classroom to the dressing room to behind the bench, Vincent Robbenhaar always leads by example.

A graduate of Eastview Secondary School in Barrie, Robbenhaar won the academic award for highest overall average in his school two years in a row with a 97.75 % average in grade 11. Robbenhaar played rep hockey in the Barrie Minor Hockey Association from 2013 to 2018 and was alternate captain many of those years.

“I really love all the sciences and the maths, and I really enjoy understanding how things work,” Robbenhaar said.

“Vincent is an extraordinary student. He is incredibly respectful, loves problem solving challenges, and loves to work with others collaboratively,” said his former teacher Megan McColm.

His coach, Ed Mauro, said he was the player every coach wanted, very committed and a quiet leader well-liked by teammates.

“In grade 8, he was actually taking grade 9 science courses which was out of this world for the rest of the team.”
Robbenhaar said hockey has left an indelible mark on him.

“I had many exceptional coaches that dedicated countless hours towards my development,” Robbenhaar said. “This had a positive impact on my life and helped me to develop into the person I am today.”

That’s one of the reasons he started coaching a U7 hockey team.

“I have a great sense of civic duty and wish to give back to the hockey community and to the next generation of young hockey players.”

In addition to his various roles in hockey, Robbenhaar also participated on his school’s track and field team as well tutoring other students.

Whether it’s starting a new school club or skating as one of the only girls on a boys hockey team, Chloe Ryder isn’t afraid to tackle any new challenge that comes her way.

A graduate of Tilbury District High School, Ryder starred as captain on the school’s Skills Ontario team, placing ninth in Ontario in the architectural competition. She played in the Kent Minor Hockey Association for 13 years and also worked as a timekeeper at the arena. Ryder was awarded Most Sportsmanlike on her team in multiple seasons and won the Association’s Dylan Chapleau Memorial Award for exhibiting the most sportsmanship in all local league programming.

“Many skills that I learned from the game I have used throughout my life. Hockey is most definitely the base for many different aspects of my life,” said Ryder.

Ryder’s high school principal, Benjamin Lawton, said she was actively involved in the student council where she was the Co-Minister of Equity and Inclusion.

“Chloe stands out the most due to her involvement with things like school council and her willingness to try to start new clubs – things like the crochet club,” said Lawton.

The crochet club Ryder founded made baby hats and donated them to the London Health Sciences Centre for shaken baby syndrome as well as blankets for the local women’s shelter.
Ryder was also a member of the school’s archery team and led a number of food drives.

She is now studying Architecture at Laurentian University in Sudbury.

A 95 average in his Grade 12 school year put Andrew Salgo at the top of his class. Now it’s taken the Guelph native overseas for his post-secondary education.

Salgo graduated from Guelph Collegiate Vocational Institute where he was a member of the International Baccalaureate program. He helped organize a Relay for Life that raised $43,000 for cancer research. He also organized a sports equipment drive for children in the Guelph area who couldn’t afford it.

“I just wanted to give back to the community a little because of all the joy and happiness hockey has brought me. I genuinely want to make a difference – just put a smile on some kids’ faces,” Salgo said.

Salgo is studying law at the University of Nottingham in the United Kingdom. Perhaps not surprisingly because of his love for the game, he is also involved in the school’s hockey program.

“I’ve known since I was young that law is something I’m passionate about and it’s something that’s always interested me,” said Salgo.

Salgo played in the Guelph Minor Hockey Association for 13 years. He demonstrated a drive and passion for the game and his desire to give back to his community in many ways. He recorded approximately 400 hours of community service through different organizations and initiatives. 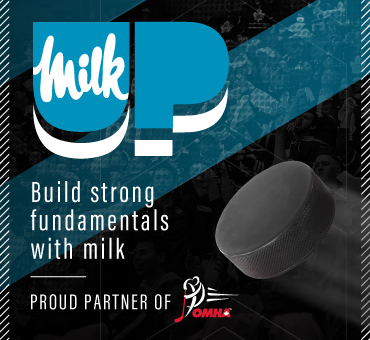